The Goblin Invasion was a community focused event that ran over a series of 5 weeks. The progression of this community quest was determined by voting in polls to decide who fights with the players and where as well as collecting items needed to defeat never before seen bosses. The event was first teased on 10 May 2013, then released in successive weeks between 2 August - 5 September 2013 as the goblins attacked various locations across Gielinor.

The goblin raids were first introduced in May 2013 without any official announcement. The goblin invasion stage of the goblin invasion was a series of raids on Varrock. Dozens of level 4 Goblin raiders would spawn at one of the entrances to Varrock and make their way toward the town centre, fighting the city Guards and players who attacked. The goblins could spawn at the East, South, and West entrances to Varrock.

Prior to the start of the event in August, Town Criers shouted "Rumours abound about goblin raids!".

The first stage of the Goblin Invasion began several months later after a blog post mentioned intelligence that the goblins would be returning to raid Varrock, Lumbridge, Falador, Ardougne, and Yanille. A poll was held to determine where the human armies should be stationed, and Falador was chosen as the primary location.

Every hour, a new goblin attack started.[1] Warrior women, paladins, Knights of Ardougne, and Varrock guards appeared in Falador to help fight the invasion. After community feedback from the first stage, the goblins were made higher level and gave more useful drops. The Goblin raiders were increased to level 30, and level 50 Goblin lieutenants were introduced. In Falador, the goblins would spawn at the northern and southern entrances, as well as the agility shortcut on the western wall.

The first official reference to the Goblin Invasions was in the 2 August 2013 Patch Notes.

The following week, the goblin raids moved to Lumbridge Castle, and attacked the citizens of Lumbridge. The combat levels were increased from the previous raid, now involving level 50 Goblin raiders and level 75 Goblin lieutenants.

The third stage introduced a new map area for fighting the Goblins in their lair. The goblin lair was accessed by following the Scout in the Varrock Castle courtyard. The map was a repurposed version of the Skavid caves, and contained Goblin raiders and Goblin lieutenants. The goblins could be fought to gather the cursed goblin staff, cursed goblin hammer, and cursed goblin bow, which would be used in later stages to defeat the goblin bosses. 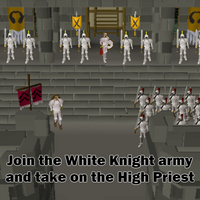 The following week introduced the goblin temple, which was accessible through a cavern just inside the goblin lair. The lair could now be accessed using a Portal in the Varrock Castle courtyard. The Commander was stationed next to the portal and explained that the High Priest could only be defeated using the cursed goblin weapons dropped by Goblin lieutenants.

After a poll, it was decided to have White Knights assist the battle against the Goblin High Priest. The temple had a large number of level 50 Goblin raiders and level 75 Goblin lieutenants, which could be fought in a multicombat zone. After defeating enough goblins, the High Priest would appear and cause the screen to shake. The High Priest did not have a visible combat level, and could only be damaged by the cursed goblin weapons dropped by the other goblins. When the High Priest was defeated, a disk of returning would be placed directly in the inventory.

The 4th stage was announced in Update:Goblin Raids: Taking down the High Priest. According to the dev blog, the goblin temple was the first map square developed exclusively for Old School. At the time, the map editor had just been created and there was no model editor, so all the assets inside the temple were repurposed from other areas. This included a wall from Evil Dave's basement, a fence from Varrock, and a rope bridge from Ape Atoll. 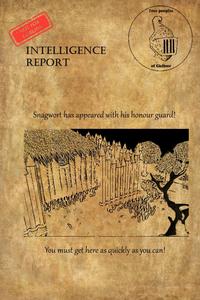 The final stage of the invasion occurred the following week, and was located near Barbarian Village. Forces of level 50 Goblin raiders and level 75 Goblin lieutenants were joined by newly introduced level 50 Goblin priests, which could freeze the player. Every half hour, a level 100 King Snagwort would arrive to fight the player. [2] When King Snagwort was defeated, a half full wine jug would be placed directly in the inventory.

The event was removed on 5 September 2013, and the cursed weapons were made available in Diango's shop.