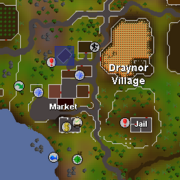 The location of Diango's workshop.

Players started the event by talking to Diango in Draynor Village. He then handed players an empty Ghost buster 500 with 50 rounds of white destabiliser and five lots of other, variously coloured destabilisers. His workshop was towards the north side of Draynor. The pixies Fionn and Cait will be at the ground floor of Diango's workshop (the building northeast of the red exclamation mark on the map); the pixies will be very frightened of the geists. Go inside the building, open the trap door, and proceed down the ladder.

A player dismisses a geist.

Once one entered Diango's Workshop, it became immediately apparent that tables, toy boatmen, wooden ducks, possessed puppets and creepy 'hand in box' toys had come to life. The toys and other such animated objects could not attack or hurt players, however the ghosts possessing them had been scaring the fairies, and as such had to leave. To rid a toy of its possessor, players simply had to load the Ghost buster 500 with the white destabiliser, which revealed the ghost's true identity. Shooting the first ghost would earn players the scared emote. Once the ghost's colour had been revealed, players had to shoot it with the correspondingly coloured destabiliser, which would send the ghost screaming back into the Underworld. Once busted, ghosts would stay busted, even if players left the workshop.

After busting 3 of a particular ghost colour, Diango would reward players with one of the five pieces of the Skeleton costume. Obtaining the full set required players to bust three of every coloured ghost. Diango would then take back the ghostbusting equipment. 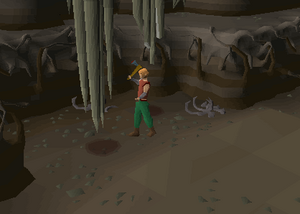 Chopping the roots underneath the workshop.

Diango also wanted players to rid his workshop of the tree in the middle. The best way to do that was be to try attacking it from the inside, cutting out the roots which required an axe. Proceed to the same abandoned building in the north of Draynor Village, and you will find the pixies Cormac, Sorcha, Fionn, and Cait; all of whom are too frightened to talk. Open the trapdoor and proceed down the steps. There will be two ladders in close proximity to the trapdoor steps, take either ladder down to the basement, and go to the front of the tree. Pull up the large root in front of the tree and it will pull you down. You will see a bunch of hanging roots, which, if chopped, gives evil roots. Once you had chopped 10 evil roots, you could return to Diango to get your reward, a Jack lantern mask.

A player wearing the Skeleton outfit.

The Skeleton outfit gives no bonus in any stats. Players had to banish different coloured ghosts in order to receive the costume. The costume consists of a mask, shirt, leggings, boots, and gloves.

The Jack lantern mask was the second reward received from Diango. They have no bonuses either so they are purely for show.

In addition Diango rewarded players with a Scythe, a Zombie head, an untradeable Black h'ween mask and two noted Pumpkins, red, blue, and green h'ween masks and the Scared emote.

The rewards can be reclaimed from Diango in Draynor Village if lost or destroyed, and items may be stored in the costume room of your house.