On 1 April 2014, Jagex announced that the Sailing skill was released.

The newspost announced the release of the Sailing skill and that players were able to visit the Eastern Lands by speaking to Captain Emmemji south of Draynor Village.

Quickly players found that they only ended up on one island and that players can only earn a maximum of 5,000 Sailing experience; attempting to earn more experience resulted in the skill resetting to level 1 with 0 experience, accompanied by the chatbox message: ### CRITICAL ERROR: %sailing_xp memory overflow, resetting to safe state. This meant players could not reach levels beyond level 20. 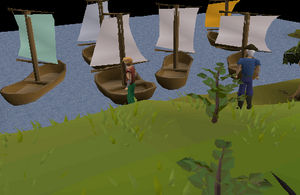 The boats south of Draynor Village.

Players could begin gaining experience after speaking to Captain Emmemji, who explains who he is and how the skill works: Simply by using one of the boats. Players can only take three types of boats:

The only island players could travel to using the boats.

There was a single island to travel to, which was supposedly part of the Eastern Lands, but was actually part of the Water Altar. The following NPCs could be seen on the journey, but not interacted with: