On 20 February 2014 players were able to visit Prifddinas during the first anniversary of Old School RuneScape. Players could speak to the Lumbridge Guide or any of the elven emissaries around RuneScape to teleport to Prifddinas. The emissaries could be found at:

At the first birthday party, Prifddinas contained a few Elven City guards (if you tried talking to a guard, you would get the message He's standing deadly still and not responding to any attempt you make to distract or talk to him). Numerous ankou are also found around the city with the examine text They're EVERYWHERE!!!!

A rack of crystal halberds.

North of the five western banquet tables was the Lumbridge Doomsayer, a bank chest and a table where players could take a War ship and a Birthday present, which contained a cow mask. Here, a rack of crystal halberds could also be seen. If players attempted to take a halberd from the rack, a game message will appear in the player's chatbox, stating Trolled - Love, Mod Reach. 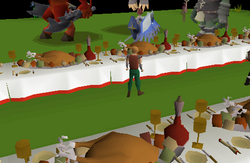 The large banquet, with the God Wars Dungeon bosses present.

Within the city walls contained an exhibit of monsters and objects as they appeared in RuneScape's early days. Reading the signs on each exhibit will shed more light on how they came to be. The zoo also contained many previously unseen, unreleased NPCs that were either scrapped or never released, such as the Lizardmen.

Mammoths, never released into the game before.

An exhibit displaying the old appearance of the Kalphite Queen. 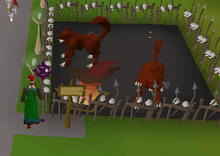 An exhibit displaying the old appearance of hellhounds.

An exhibit displaying the old appearance of magic trees.