From Old School RuneScape Wiki
Jump to navigation Jump to search
The RuneScape Wiki also has an article on: rsw:2014 Christmas event

The 2014 Christmas event began on 18 December 2014, copied from RuneScape's 2005 event. Unlike the original event, Old School RuneScape has an additional event which involves helping Anti-Santa, who rewards pieces of the Antisanta outfit.

The location of Diango's Workshop.

Diango needs help - the Pixie workers whom he hired to help in his workshop aren't working out. They're so accident prone that despite all their hard work, they're getting nothing done. Find Diango down in the Draynor Market, and he'll tell players where his workshop is, which is the small shack north of him. Entering the trapdoor in the floor will lead down to Diango's workshop. There are three parts to the event.

Inside the workshop: Marionettes[edit | edit source]

Once there, players should speak to Rosie and will be told that they need to put together some marionettes and paint some baubles, as well as packing them into the appropriate boxes. Speak to Rosie for a puppet box.

Players making marionettes during the event.

Climb down the ladder, and pick two of the following in order, two for each colour: Torso, Head, Arms, and Legs. Once the marionette is assembled, Rosie will add strings and it can be put inside the puppet box. Two of each coloured marionette will be required to fill the box. Eight boxes in total will need to be filled - which requires 16 red, blue, and green marionettes.

The location of the Bearded stranger.

Once all boxes are filled, players will be instructed to go to the Taverley gate to deliver the boxes to a Bearded stranger, who appears to resemble Santa Claus. Once all eight boxes are delivered to the stranger, players can return to Diango to receive all four winter hats.

Inside the workshop: Baubles[edit | edit source]

The baubles are on the same floor as Rosie - do not go down the ladder. On the east side of the workshop, take at least twenty baubles - the type does not matter. Speak to Rosie for a bauble box, and head to the west side of the workshop. Players must paint five baubles with five different colours (blue, green, pink, yellow, red) and use them on the box. Once filled, hand it in to Rosie. She will need eight boxes, so fill additional bauble boxes for her. Once all eight boxes are handed in to her, players can return to Diango to receive all four winter scarves.

Once she has all the boxes she needs, fill five additional boxes, and use the boxes on the Christmas tree in Varrock Square. Then, open one of the gifts under the tree. Doing so will reward the player with the Santa outfit, and other Christmas holiday items from the previous year.

Note: You can also get baubles by robbing Santa-dressed imps around Draynor.

A player uses the box to obtain coal.

Head to the eastern part of Falador. Outside the Party Room, the Anti-Santa requires that lumps of coal be brought to him. He will give players his coal box, and instructs them to use it on any coal rock. A convenient place to do this is to run east and climb down the stairs to the Dwarven Mine, where two coal rocks are available. Use the box on the rock or attempt to mine it (no pickaxe required), and the box will be filled. Bringing this to Anti-Santa will give players pieces of the Antisanta outfit, in order: jacket, gloves, pantaloons, boots, and mask. The process can be repeated each day to receive the next piece of the outfit. Once the player has obtained the full outfit, Anti Santa will give players two noted christmas crackers for each full box given to him.

The Hats and scarves was one of the rewards for delivering all eight puppet boxes to the Bearded stranger. They have no bonuses and are untradeable. If lost or destroyed, the player can obtain another from Diango in Draynor Village. In addition, players can search the crate at the entrance of Diango's Workshop to obtain three marionettes.

Players who placed five bauble boxes on the Christmas tree in Varrock Square, after giving eight to Rosie in Diango's Workshop, are rewarded the Santa outfit by unwrapping one of the gifts under the tree. In addition, all previous Christmas holiday items were rewarded, including two sets of Christmas crackers, Santa hats, and Partyhats.

Players can also help the Anti-Santa in filling his coal box, by using the box on any coal rock. Doing so once per day will grant players part of the Antisanta outfit. 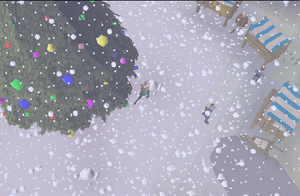