The 2014 Goblin Invasion was a community focused event held between September and October of 2014. It was a sequel to the 2013 Goblin Invasion event held the previous year. The event was held in Falador, and allowed players to side with either the Falador white knight guards or the goblin factions fighting in the invasion. Ultimately, the guards successfully defended Falador against the goblin army invasion.

First announced on 8 September, the invasion began in Falador with large numbers of goblins and guards appearing around the northern entrance to the city. Players could enlist with the guard faction by talking to the Guard Recruiter next to the Falador General Store, or join the goblins by talking to the Goblin Recruiter on the city wall west of the northern entrance. Once on a team, the player would not be able to switch to the other side.

The entrance to the Mining Guild overrun with goblins.

Three days later on 11 September, the second stage was introduced. Both sides introduced a system using the event rpg (rocket paint gun) to cover enemies in paint before attacking them. Players fighting for the guards could launch paint at the invading goblins, using either the Paint or 360NoScope-paint options.

Successful hits would turn them into painted goblins, which would then be killed for their drops and increase the guard faction score. Similarly, players aligned with the goblins could paint guards, turning them into attackable green guards. When fighting a painted monster, other members of the faction would join in the attack. 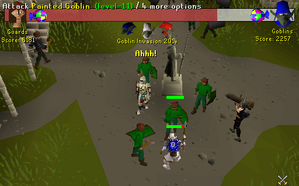 The third stage started on 25 September after two weeks of battle. Players previously aligned with the goblins were booted out, due to the failure of the previous attacks, and had the choice to realign to the guard faction.

This stage introduced General Danknuck, a large goblin located north of Falador. Danknuck could only be damaged using the event rpg, and had similar drops to the other goblins but in higher quantities.

The event was removed on 2 October after the final week of fighting. The goblins and guards were removed after the goblins failed to push through the defences of the white knight faction. The event rpg was added to Diango's Toy Store and changed to fire paint at other players.