From Old School RuneScape Wiki
Jump to navigation Jump to search
The RuneScape Wiki also has an article on: rsw:2007 Halloween event

The 2014 Halloween event was the holiday event taking place from 23 October 2014 to 5 November 2014. The Grim Reaper's servant had just recently passed away, prompting Death to search for a temporary replacement to make sure that his terrifying Mansion of Death was in good order to receive his new servant. During the event, players were given three tasks by the Grim Reaper to help clean up around the Mansion of Death.

This event could be started by entering the black Player-owned house portal south of Falador, near the elemental wizards and Malignius Mortifer. When players went near the portal, the screen would darken, teleporting them to the Grim Reaper's abode. 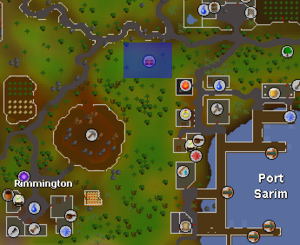 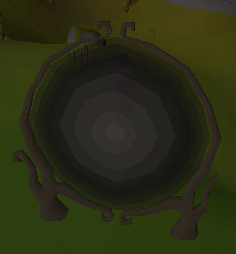 The Grim Reaper, killing a player.

If a player leaves during any task, they will be forced to restart that task. When restarting the player will appear just outside the Dark portal.

Enter the Dark portal to start, then talk to the Grim Reaper sitting on the east side of the entry room. If you try to go through the doorway into the house without first talking, you will instantly be electrocuted, losing all of your Hitpoints. The Protect from Magic prayer will not protect from the electrocution. However, upon death no items are lost and you'll reappear outside of the portal entrance. (Grim Reaper: You may be able to wander around other people's houses, but I shall not allow it).

After talking to the Grim Reaper and accepting to help him, you'll be allowed to pass through the doorway (Message: You safely pass through the gargoyles' judgement. and Gargoyle: We're watching you...).

Players can interact with the Grim Reaper's pet Growler in the main room. Only one emote will lead to success to the second task, one is nothing, the remaining one causes 'sudden death' and restarting. Players can try out all three emotes at this stage.

If players tried going into the west room, they would activate the electric trap, killing them instantly and taking them back to the portal (Gargoyle: Oi. Weren't you told to go to the garden first?). Going up the stairs was also not allowed (Grim Reaper: I told you to go to the garden.).

A player successfully climbs through a spider web.

In the garden, players were asked to retrieve the skull of the Grim Reaper's old servant to prevent the new one of ever knowing what happened to him. Players had to navigate back and forth through the maze by going through spider webs. Players were only allowed through certain webs, which was different for everybody. The way back out of the garden was also different from the way in. When leaving the garden, the gargoyles took the skull from the player and the Grim Reaper directed them to the west room lounge. Note that the skull has a different examine text in player's inventory than when on the ground.

Lounge of the Reaper of Souls[edit | edit source] 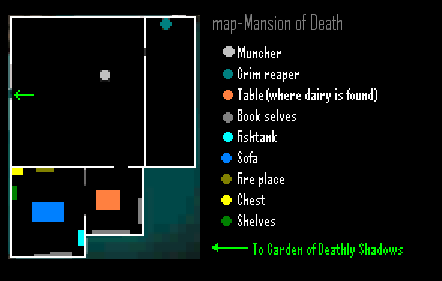 In the lounge, players are asked to find certain personal possessions for Grim and put them in their proper spots. First search the table to get The grim reaper's diary in the inventory, then read the diary to find out where everything goes. You find a diary on the table. This should give some clues as to where items within the room should go. Trying to get another copy of diary: You already have a copy of the diary, you don't need to take another. When task is done: There's no need to search the table any more.

Once players gather these items, they must put them back in their proper locations. In the diary, the items and where they should be are coloured in red.

Below are the list of items players have to find:

Searching the fishtank towards the left.

Searching the fishtank has 2 options:

Searching the sofa has 2 options:

Trying to leave the house before finishing this task will give the message: Any items you were carrying from the house have been removed. 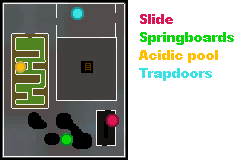 A map of the Playground of Solitude and Lost Toys.

After finishing the lounge task, the Grim Reaper will tell you to proceed up the stairs. Then, go through the doorway to the south-east. In the playground players are asked to check if his traps are in order. Players must:

Players should be extremely careful when navigating around the hidden traps near the end of the maze, as if they step on a trapdoor they will have to start the entire course over again. If players look closely on the ground in the trapdoor room, they can see some perforated lines. These lines are traps so players should avoid them at all costs!