From Old School RuneScape Wiki
Jump to navigation Jump to search
The RuneScape Wiki also has an article on: rsw:2015 Christmas event

The 2015 Christmas event was an original Old School RuneScape event, unlike the 2014 Christmas event, which was based on RuneScape's 2005 event. Rewards from the event included the new black santa hat and inverted santa hat. The event started on 15 December 2015 and ended on 7 January 2016. 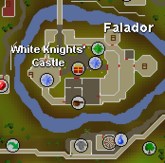 Speak to Santa. He believes it's too dangerous for him to be out there while his nemesis, Anti-Santa is on the loose, so the White Knights are keeping him at the White Knights' Castle in Falador until it's safe. However, he fears he might miss Christmas altogether!

Ask if there is anything you can do to save Christmas. Santa Claus wants you to find out what Anti-Santa is up to so that you can get a step ahead to put an end to his schemes once and for all. 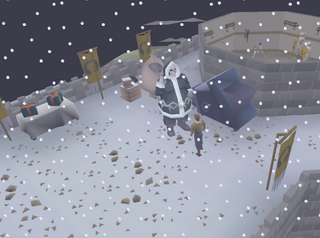 The Anti-Santa, plotting to sabotage Christmas once again.

Once there, players should speak to Anti-Santa who is located up the main stairs in Varrock Castle and up the ladder to the east. Once there, head through the door to the west. Speak to Anti-Santa, say you are there to help and say "I've grown sick of Christmas and all that it embodies." then select the option "I seek to shatter the illusion of hope this holiday embodies." He will then tell you to get an empty vial of tears from a nearby crate.

Pick up the vial from the crate, and talk to him again. He will tell you to fill it with the tears of the innocent, claiming the happy children of Varrock will make perfect candidates. After talking to him, go ahead and grab four anti-presents off the nearby table (you can't hold and don't need any more than four).

The children are located in the image below, with one being a happy gnome child: 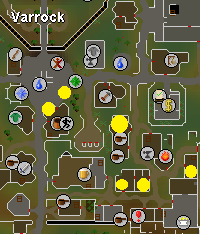 The location of all six children. Only four must be made to cry.

When speaking to the children, first select the second option, then select the first option, and you'll come across the dialogue option Give Anti-Present. The child will burst into tears, so right click the child and select Collect-tears which will add one dose to the vial.

After you've filled the vial of tears, head back to Anti-Santa, who will take the vial and absorb the sorrowful essence from the vial, and give you a vial of sorrow. He will then tell you to put it into the machine nearby. When you put the Vial of Sorrow in the machine, it will create an army of frosty spiders and frosty snakelings. Speak to Anti-Santa again, and he will tell you the creatures created are made of pure sorrow. Ask him what he plans to do with them, and he'll tell you he plans on storming the White Knights' Castle. After doing so, he will give you a black santa hat as a reward.

Talk to Santa Claus, and you will explain everything that has happened. Once you've told him everything, he believes there is some sort of link between the children and the creatures that were made, and that if you cheered up the children you upset, you could turn Anti-Santa's own army against him, and he wouldn't stand a chance against all that Christmas cheer.

Take four presents on the table nearby and head back to Varrock. Once you're in Varrock, return to the four children you upset earlier and give each a present. Then head back to Santa Claus again in Falador.

A cut scene will happen of the Anti-Santa's attack on White Knights' Castle. Anti-Santa shows up with the army of sorrow to end the festivities, but is stopped at the last minute when the creatures turn against him, dealing 99 damage. Death appears shortly, sees who died, and immediately leaves the remains of Anti-Santa behind, refusing to claim his soul. Afterwards, Evil Bob appears and takes Anti-Santa with him to ScapeRune.

After the cutscene, talk to Santa Claus again he will say he can finally leave the castle and carry out his festive duties. Event completed!

See 2015 Christmas event/Gallery for graphical variants that were used during the event. 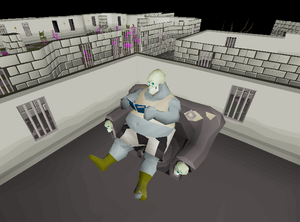