From Old School RuneScape Wiki
Jump to navigation Jump to search
The RuneScape Wiki also has an article on: rsw:2015 Easter event

In the 2015 Easter event, players must help the Easter Bunny in clearing out his warren of chocolate creatures, which have hatched from chocolate eggs that were supposed to be delivered for Easter. 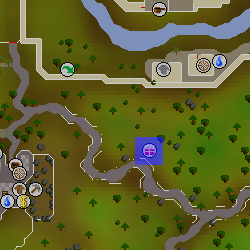 Enter the warren south of Falador, and head east into the Easter Bunny's office at the eastern end of the warren. He will explain that the chocolate eggs that were supposed to be delivered hatched into various creatures, and instructs the player to retrieve a blaster at the north end of the warren. 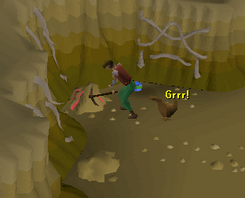 Head to the north end of the warren, where the Easter egg bird is located, and search the crate in the room to find an empty blaster and a bronze pickaxe. Next, head to the centre of the warren, next to the mining site symbol (

) and mine three volatile minerals. Use them on the empty blaster to create an incomplete blaster.

The oily substance found by the mine.

Make your way to the swampy marsh near the mine and use the incomplete blaster on the oily substance. This will create the completed Easter blaster. Now begin blasting the five chocolate creatures located throughout the warren:

TIP: Players can try to cast a spell on critters so that they will turn into the desired direction, even if the player has no required runes,since the game wouldn't let them cast anyways.

After killing the five creatures, the chocolate demon will show itself and reveal that its master, the Anti-Santa, was responsible for causing the chocolate eggs to hatch, and that he had been bored and decided to sabotage Easter. 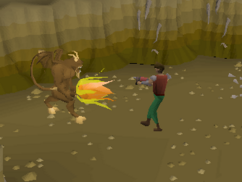 The Easter Bunny will request that you defeat the demon. The demon will consistently bind you and move to another spot to avoid being damaged. Once defeated, return to the Easter Bunny's office to receive your rewards.

After completing the event, players can open the door next to the warren exit to kill additional chocolate creatures to obtain five more easter eggs. A message in the chat box will appear stating "You have now received all the rewards you can gain from killing these critters."

After doing this event, you are also able to use the Rabbit Hop emote.