The 2016 Christmas event was a holiday event starting on 14 December 2016. Christmas is just around the corner, and some overworked factory workers need your help to get their boss to get into the holiday spirit!

Head north of Port Sarim and you will find Holly and Ivy. Speak to Holly, where she will state that their boss has been overworking them in a Christmas factory. Ask to speak with her boss, and she will teleport you to Mount Quidamortem. 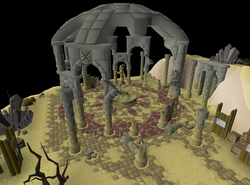 The entrance to the factory on Mount Quidamortem is found north of the Xerician monument.

Speak to Holly again. Ask her where her boss is, and she'll say her boss is named Carol and is found inside the cave entrance to the west, where the Christmas Factory is located. Head inside the cave and talk to Carol right by the entrance. Finish the conversation and return to Holly. 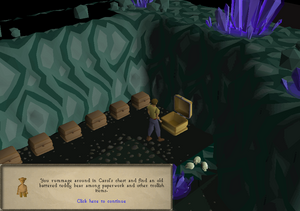 The battered teddy is found in the larger chest.

Holly suggests you find Carol a Christmas present in the cave to reignite her Christmas spirit. Return to the factory, and head to the north-east corner. At the corner, there will be storage chests. Open the largest storage chest to find a battered teddy. Give the teddy to Carol, and she will say it is not important to her and that the business targets must be met. Go outside and speak to Holly once again.

Holly will tell you that perhaps a new Christmas gift might make her feel differently, and that you should talk to the workers in the cave to find a suitable present to make.

Note: The next part is random for each player.

Talk to the coworkers around the factory and find out what Carol likes. You only need two workers to tell you what Carol wants: the colour and the item. 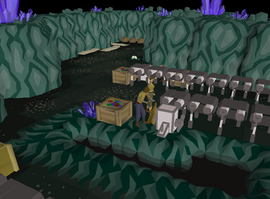 Creating a gift for Carol.

Once you have made the present, use the item on Carol. She will tell you if the item used was the right item. However, she will not change her mind.

Return outside and talk to Holly again. Speak with Holly, select to text to talk with the Oracle, and watch the short cutscene where Ulina is slain by the Great Olm. Warning: If you accidentally click away while the Oracle is talking to you in Mount Quidamortem, you will have to visit her in person! 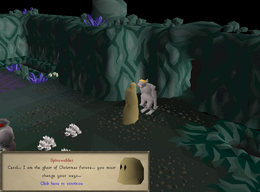 Convincing Carol to change her ways by disguising yourself as the ghost of Christmas future.

Talk to Holly again, and she will tell you to talk to Carol about the Ulina's future. She will remain unconvinced, so return to Holly once again and she will suggest to find a bedsheet and dress yourself as a ghost. Go to the factory, head to the north-east corner, and search the rough beds on the floor to get a sheet. Talk to Carol while wearing the sheet. Carol will change her ways and leave the factory.

Talk to Holly. She is annoyed at you for making Carol leave, as all they wanted was better working conditions. They no longer have anyone to manage deliveries and shipping, saying that you have ruined Christmas.

You then suggest that Diango might be able to help save Christmas. Teleport out of the event and head to Draynor Village. Talk to Diango, and ask him about Christmas workers. As he is short on workers, he will employ the workers from Carol's factory.

Return to Holly and she will reward you for your help. Event complete!

See 2016 Christmas event/Gallery for graphical variants that were used during the event. 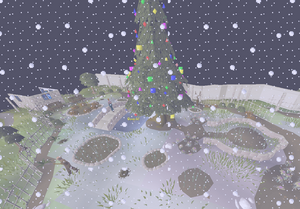