In the 2016 Easter event, players must help the Easter Bunny in clearing out his factory of a certain Chocolate Chicken, who destroyed the eggs and the presents within them. 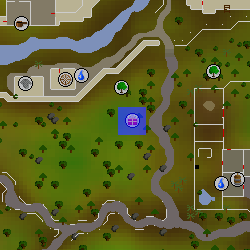 Head to the southern entrance of Falador, directly north of the Air Altar, and speak to the Easter Bunny. He will explain that while preparing to produce this year's chocolate eggs, he was visited by a travelling merchant who persuaded him to buy a potion that would make the chocolate taste better. However immediately after he added it to the mixture it began to bubble and an evil Chocolate Chicken came out of it, destroying the eggs and the presents within them.

He further notes that the presents have given the chocolate chicken the ability to teleport away from those who attempt to catch it. Players must find a way to startle the chicken into relinquishing all the presents. 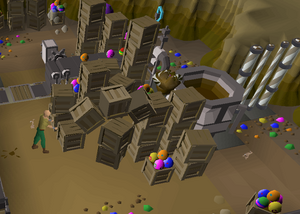 Shoving crates to lure the chicken. 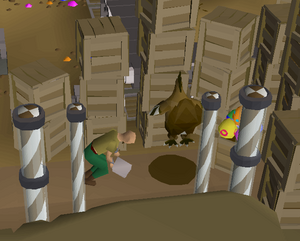 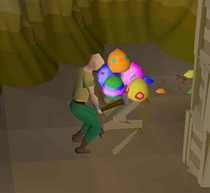 Breaking a crate of eggs.

It may also hide within moving crates of eggs. Take a hammer from the floor and break the crate, as the Chocolate Chicken is hiding inside it. It can also hide within large easter eggs; players must melt them with a tinderbox, which can also be found on the factory floor.

After chasing it eight times (making sure to crack open the chocolate egg that is left behind each time the evil chocolate chicken teleports away; if dropping crates on top of the Evil Chicken in the north-east corner, push the crates to be able to grab the chocolate egg. Getting additional chocolate eggs beyond eight is possible, but will result in no prize when cracked open, whereas the first eight chocolate eggs will give a teleport card when cracked open), players will be given the option to finish the Chocolate Chicken. They will punch the chicken, shattering it to delicious pieces, leaving a Chronicle on the ground, which can be used to teleport outside the Champions' Guild, providing that teleport cards are used on it.

Exit by using the glass elevator, and speak to the Easter Bunny to inform him of your success. Event complete!