The 2017 Christmas event is a holiday event that began on 11 December 2017. Lots of people like a Christmas vacation; Santa is no exception. While he’s taking this remarkably ill-timed break, he's deputised the Wise Old Man of Draynor Village to fill in for him. The Wise Old Man has a mixed reputation for honesty, but he's definitely got the right kind of beard. So what could possibly go wrong?

Speak to the Wise Old Man's in his house in Draynor Village. He will tell you that Santa is on holiday, and has entrusted him to fill in for him this year. He will ask you to help him, as "everyone knows Santa has his little helpers". Agree to help him.

Head to Diango's Workshop, and you will discover that the pixies are on strike. Speak to the Foreman, who will refuse to let you in the workshop, but will give you the key. He will also tell you the pass phrase to the grotto, this changes for every player - so make a note of it.

Return to the Wise Old Man. Tell him the pass phrase, and you will head to the grotto in the Land of Snow.

Upon entering the grotto, the Wise Old Man will ask you to dress up as one of Santa's little helpers. He will tear a curtain apart and ask you to cover it with snow to have it resemble a snow imp's pelt; he will also enchant the curtain so that the snow doesn't melt. Take some snow from outside the grotto, and use the snowballs on the enchanted curtains to create enchanted snowy curtains.

Return to the Wise Old Man, and he will need you to turn the curtains into a costume. He ask you to speak to Thessalia, and will give you a teleport tablet before teleporting you directly to her shop in Varrock.

You will ask Thessalia to make a costume for you, but she will refuse due to being busy. Iffie will offer to help you instead. Speak to her, and she will sew you a snow imp costume.

Return to the Wise Old Man using the teleport tablet he gave you earlier. If you lost it, simply return to his house to teleport back. He will ask you to speak in a snow imp's accent, which is a Cockney accent. Pick the second chat options whenever there's two options with the same answer. 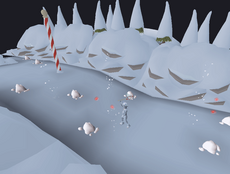 The Wise Old Man will ask you to recharge the reindeer's nose. Head east inside the grotto, and speak to Dolph. He will tell you that you must shove Snow Sprites up his nose in order to have them glow. In order to catch snow sprites, you must take the fine mesh net just outside the grotto, in the south-west corner from Dolph. Catch three snow sprites, and use them on Dolph. Snow sprites can be found outside of the house, near the piles of snow. 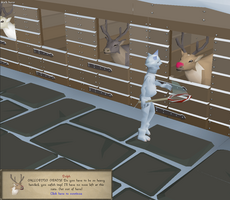 Dolph comments on the player stuffing his nose with sprites.

Talk to the Wise Old Man. He will ask you to find a suit to dress up as Santa. Search the wardrobe to obtain a Santa suit. As it is too large, he will ask you to shrink the clothes using hot water. Head north-east of the grotto, and take a tinderbox from the shelf, and two logs and kindling from the pile of logs. Use a log on the washer furnace and dryer furnace, and light them both up. Now, climb up the washer furnace first and use the Santa suit on it to produce a wet Santa suit. Then, climb up the dryer furnace and use the wet Santa suit on it to produce a dry Santa suit. Give this to the Wise Old Man.

He will ask you to find the key to Santa's vault. Lift the plant in the corner to find the vault key. Enter the vault next to the plant, and take Santa's seal from the shelf. Talk to the Wise Old Man again, and he will ask you to write a promissory note with Santa's seal on it, which guarantees that Santa will pay for Diango's toys once he returns. Use the desk to write the note and talk to the Wise Old Man again. 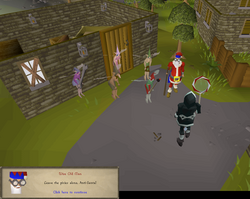 The Wise Old Man "rescues" the pixies from the player, who is disguised as Anti-Santa.

Take Santa's empty sack from the corner of the room, and use the North Pole outside the grotto to teleport back to Draynor Village, and talk to Diango. He will accept the letter, but discovers that the pixies are on strike. Talk to the foreman pixie, who explains that they are on strike because they do not get a holiday, while Santa does. Return to Diango, who suggests you speak to the Wise Old Man, who suggests you dress up as Anti-Santa to scare the pixies, while he, as Santa, "rescues" them. You will then receive the Antisanta outfit if you haven't obtained it already. Reclaim the anti-santa outfit from Diango if you had done a Christmas event before. Wear it, and go talk to the foreman again. You will have to choose options 1, 3, 5, and 8 for terrifying the pixies.

Once you've scared the pixies, go to the building they were picketing and go down the trap door. Talk to the foreman with the empty sack in your inventory. He will fill it with presents. Go back to the Wise Old Man, and give him the presents. Get out the building and the guard in the tree will interrupt you, and show you a cutscene in which the Wise Old Man steals Santa's gold from his vault, and informs you that Santa is in Corsair Cove with his son, Jack Frost. 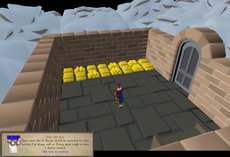 You can speak to Captain Tock at the crossroads north of Port Sarim (this starts the The Corsair Curse quest). If you have already completed the quest, board the ship just south of The Rusty Anchor pub and speak to Cabin Boy Colin. Alternatively, use the spirit tree in Feldip Hills if you've completed Tree Gnome Village. Yet another alternative, is to take a Charter ship directly to Corsair Cove, which costs 1200 gp but does not require any quests to be started or completed. 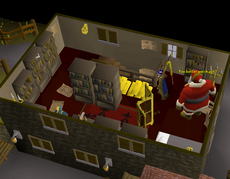 Santa is on the easternmost beach of the Cove. Tell him that the Wise Old Man has stolen all his gold from his vault. A cutscene will ensue in which the both of them "have a chat". Return to Draynor Village and talk to the Wise Old Man to complete the event. 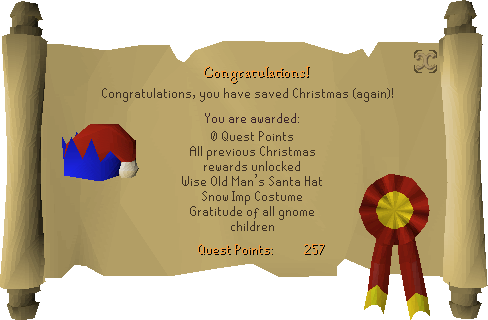 See 2017 Christmas event/Gallery for graphical variants that were used during the event. 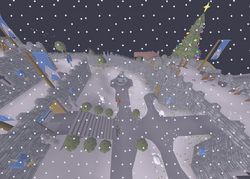 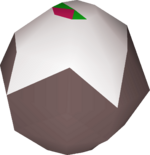 A cannonball resembling a Christmas pudding.
Retrieved from ‘https://oldschool.runescape.wiki/w/2017_Christmas_event?oldid=14273582’
Categories: