The 2017 Halloween event was a holiday event that took place from 19 October 2017 to 9 November 2017. The Grim Reaper seeks your help as he senses a disturbance in the force.

A player can start this event by talking to the Grim Reaper at the graveyard in Lumbridge, just south-east of Lumbridge Castle. The holiday event icon

displays the location of the event on the minimap.

Before the player begins, bring tin ore, grain, and a bucket of water, as this will save some time. Players should also have Lumbridge Teleports if they have the required Magic level to cast it.

Speak to the Grim Reaper in the Lumbridge graveyard just south-east of Lumbridge Castle. He has been feeling a disturbance in the souls of the dead, specifically a soul who is struggling to break free. As he is unable to sense it, he will request that you look into this for him. Agree to do so, and he will tell you, vaguely, the locations of some spectral occurrences around Varrock: three within the city, and three south of the city walls. He will give you a death note, which lists the locations of the spectral occurrences, and offer you a one-time teleport to the city.

The image below indicates the location of the six masked strangers found throughout Varrock. 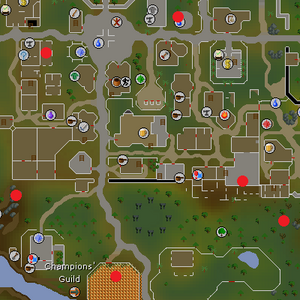 While at the South-east Varrock mine, pick some tomberries from the bushes. If you don't already have tin ore and grain, you can mine and pick them after observing the masked strangers.

After observing each stranger, head to the Apothecary and ask him about the Halloween event. If you have the tin ore, wheat, and tomberries, he will mix them together and give you a murky potion. 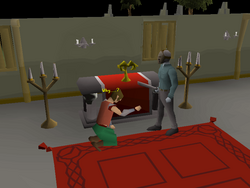 The masked stranger kills the player!

Return to the Zamorakian altar in the south-east corner of Varrock. Use the murky potion on the altar to create a spectral potion. Use it on a masked stranger to trigger a cutscene. The stranger will then appear to come back to life, and proceeds to stab you (you will not lose any items).

Death explains what happened to Jonas

You will end up back to Lumbridge where the Grim Reaper is. He tells you that he felt an incredible burst of energy from the spiritual realm, and rescued you from the brink of death. He then asks you what you had done, and angrily tells you that you have unleashed the "truest of all evil", the monster known as Jonas. He will then tell you to seek Jarvis, who had killed Jonas. To reach Camp Sapphire Lagoon, where he is found, players must board the small boat directly south. It is the same boat in which players use during the Misthalin Mystery quest.

Once on the island, enter the hut there. If players do not already have a bucket of water, there is a pile of buckets next to a well just east[?] of the hut. Pick up a bucket and fill it by using it on the well.

In the hut, search the mouldy rug in the north-east corner. The trapdoor is locked, so you must search the hut for clues: 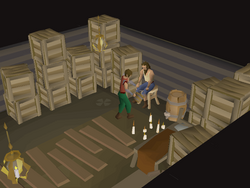 The player shocks Jarvis by throwing water at him.

The letter the player should decipher is CLAP. Perform the Clap emote next to the trapdoor to trigger another cutscene. You will now enter the basement where Jarvis is. Every time you finish the dialogue with him, use a bucket of water on him. There is a water barrel next to him to refill the bucket.

He will then say that he cannot kill him again, as doing so cannot guarantee their safety. He will suggest to trap Jonas somewhere where no one will ever find him. Choose the option Underwater. He will find an underwater cavern on the island, while you must find a way to trap him permanently. He will suggest that you speak to Traiborn. Make sure you complete the dialogue.

Do not teleport out, or the appropriate chat option will not appear. Instead, return to the boat and travel to the Wizards' Tower from there. Speak to Traiborn, who is found on the 1st floor[UK]2nd floor[US]. Ask him how to permanently trap someone, and he will suggest a time bubble. He will give you a riddle: PINS, HANDEGAB, and WOKBLISS. He will give you a set of notes to remember it.

The letters unscrambled are SPIN, HEADBANG, and BLOWKISS, so perform the Spin, Headbang, and Blow Kiss emotes in that order. He will then give you a time bubble.

Meet Jarvis at the dock on the island. He'll give you a diving apparatus and fishbowl helmet. You cannot enter the dive if you have a familiar or pet equipped, either out or in your inventory. You must bank or release your pet/familiar. Dive in via the anchor chain nearby. Jarvis has set up a bear trap to immobilise him for the time bubble, and will make himself bleed to lure out Jonas. Once he does so, go to the north-west corner, and Jonas will appear. However, some rocks will fall, forcing the player to lure him the long way back. 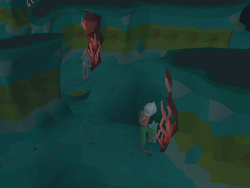 The player lures Jonas by taunting him.

Players must taunt him by using the Beckon, Spin, Headbang, Blow Kiss, Raspberry, Yawn, or Salute emotes to lure him through the cave. Red corals are indicators of where he must throw his harpoon. While doing this, players must evade the harpoon he throws at the last moment to allow it to hit the red coral. Otherwise, they will be hit. If they are hit three times, the players must start over from the last checkpoint.

In addition, if a player takes too long to lure him, or if they speak to Jarvis, an arrow will appear in the map, indicating where to lure him. Once the player lures him next to Jarvis, he will be trapped, and Jarvis will instruct the player to use the time bubble on Jonas. If the player takes too long to do so, however, Jonas will fatally strike Jarvis, who dies. The player will then use the time bubble and remove his mask, trapping him forever. If Jarvis survives the player will need to talk to him and then Death to collect the reward, however if Jarvis dies the player only needs to talk to Death to claim the reward.

Return to the Grim Reaper to finish the event.