The 2018 Birthday event was the fifth annual birthday event held in Old School RuneScape, celebrating the release of the game on the 22nd of February 2013. The event involved helping Da Vinci complete his painting.

The Falador Party Room also contains an entrance in the north side, which is a museum of past Old School RuneScape updates.

Speak to Da Vinci inside the Falador Party Room, and learn that he needs the player to make a sword to complete his painting. He will ask that you make a prop sword out of logs. Use a knife on some normal logs to make it, and give it to him. 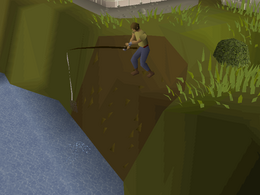 Fishing for the gem south of the castle.

Next, he will require a sapphire for the sword. He requires a special type of sapphire, and asks you to speak to Herquin south of Falador's western bank in the gem shop. Herquin will reveal the gems can be found in a moat directly south of the White Knights' Castle, where ceremonial swords were dumped into the moat for each knight that died.

To obtain the gem, use a small fishing net on a fishing rod to obtain a rod with net. Run south of Herquin's gem shop and go to the fishing spot west of Wayne's Chains - Chainmail Specialist directly south of the White Knights' Castle and fish with your rod with net at the fishing spot to obtain a semi-precious blue gem. Return to Herquin and have him polish the gem, then return to Da Vinci with the now polished blue gem.

Next, he will require a green dragon to get the idea for his painting. He will require something small. You will look around the room, and will be prompted with three options to choose from: An imp, the gnome child and the Wise Old Man. Pick the first option. As imps are red, you will need a green dye. 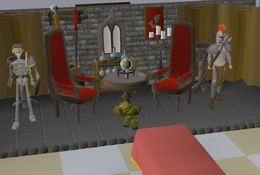 The completed display for Da Vinci to paint.

Speak to the Dunce in the party room, and he will be dyed green. Speak to Da Vinci once more to complete the event! The entrance to the museum.

The Party Room contains an entrance to the basement to the north, resembling the game's Main Menu, and has been converted into a museum of past Old School RuneScape updates. Each gallery contains displays of past updates, with the examine text stating their date of release. You can see this area still in the game if you go to the ladder under the Obelisk of Air in the Edgeville dungeon and look to the west. 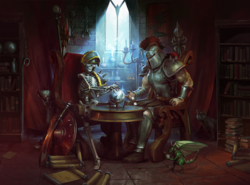