The 2018 Christmas event was the Christmas holiday event that began on 13 December 2018.

Before you begin, bring a spade, knife or shears, and a ball of wool. Teleports to Lumbridge and Falador are also recommended.

Make your way to Lumbridge, head to the 1st floor[UK]2nd floor[US] of the castle and speak to Duke Horacio. A particularly harsh winter has hit Lumbridge, and the Duke wants your help in a little project of his. Seeing how much extra work the people of Lumbridge have put in recently with so many new adventurers in town, he'd like to give them something back. However, as he has so much paperwork to do, he asks you to do it instead.

The Duke will ask you to deliver presents to the townsfolk as Santa, but he doesn't want to see you deliver them. He will ask you to disguise yourself as a festive tree, to make it appear as if the Duke had planted the tree near them and holding a present for them. Ask the Duke all possible questions before leaving!

Use a ball of wool to tie these together to obtain the Christmas tree costume. Now equip the Tree top, Tree skirt, and Star-face before talking to the Duke. 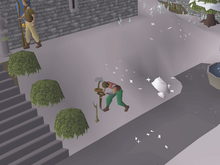 Digging up the pear tree in the castle's courtyard.

Once you've gathered the items, press the "Give" option when near them while wearing the Christmas tree outfit. 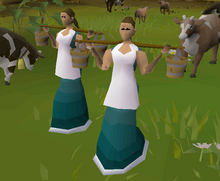 The Doomsayer is surrounded by Falador Knights dressed in pink!

Once you've given the items to everyone, return to the Duke once more. Congratulations, event complete! 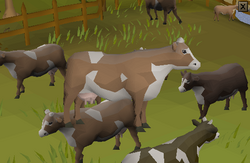 Pin the tail on the cow!

North of Fred the Farmer's farm, a cow pen with a cowboy can be found. He opened his Christmas present early, and now the tails on his cows are falling off. Seeing this, Jack Frost has cursed him, giving him green hair. He will ask you to find the cow tails and put them back on the cows. To obtain a cow tail, players must kill cows until they drop one.

Once players have a cow tail, they must find an unattackable cow and pin the tail on them. An interface will pop up with a rotating cow, and the screen will fade to black. Players must then pin the tail much like the children's game Pin the tail on the donkey.

This event gives no rewards.

See 2018 Christmas event/Gallery for graphical variants that were used during the event.