In the 2018 Easter event, players must help the Easter Bunny with yet another egg-related travesty. 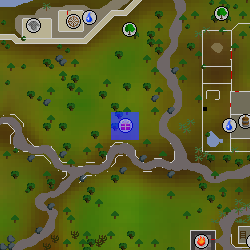 Head to the southern entrance of Falador, directly east of the Air Altar, and speak to the Easter Bunny. He will ask for your help in chocolate egg production, and asks you to speak to his son so you can do all the work and get none of the credit. Head inside the rabbit hole, and speak to Chocco. 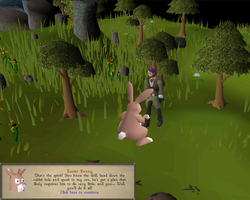 The Easter Bunny cuts to the chase, setting the tone for the event.

Chocco will tell you that they have moved their main office from Wester Island back to Falador, and is unable to afford to transport costs. Thus, the cave lacks all the machinery and equipment required to produce chocolate eggs. Chocco then proposes to create a single chocolate egg, and making it HUGE by using magic. He refers you to a certain necromancer, who can be found south of the rabbit hole entrance.

Speak to Malignius Mortifer, and ask him about making a growth spell. He will ask you to gather a cabbage from Draynor Manor, burnt meat and garlic. Normal cabbages will not work! The cabbage are located within the fence line on the west side of the manor just north of the farming patch visible on the minimap. 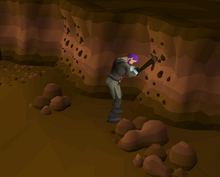 Give Chocco the growth potion, and he will then ask you to make a special chocolate egg, as ordinary chocolate doesn't have the earthy flavour he requires. Mine one chunk of chocolate to the east (a pickaxe spawn can be found west of the chocolate deposits). Then, climb down the rope in the south-west and navigate the maze. 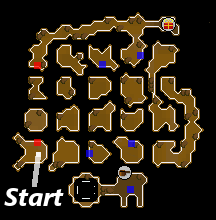 A map of the maze. 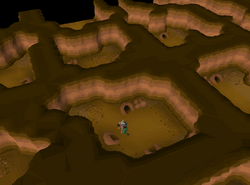 Navigating through the rabbit holes in the warren.

The maze is navigated by using rabbit holes, and it will teleport to the nearest hole in the opposite direction, except if you stand in the most northern hole and go south, you will appear in the most southern cave; the same goes with the western or eastern sides.

To reach Milkee, go through the north rabbit hole once, then run to the end of that corridor. He will give you a quiz, and asks you which of the three major gods are your favourite.

Depending on your choices here, the final fight may be more difficult for lower levels, so it is recommended for lower levels to pick Saradomin or Guthix. See the next section for more details.

Once you answered all the questions correctly, take the appropriate idol of the god you chose, and use the rabbit hole that you came from to start over.

You will now need to reach Goldie. From the beginning of the maze, use the following rabbit holes: west, north, west, south, west, north. 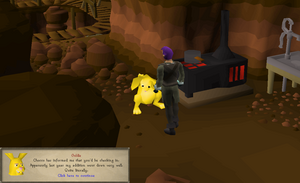 Checking in with Goldie.

Speak to Goldie, and he will ask you to give him some flavours by colours, as he does not know their names.

Flavours can be taken from the shelf north of the room. (2-1-3 is the order he asks for).

Give him the ingredients, and he will defecate some nuggets for you. Take the egg mould from the floor, and make the small chocolate egg via the stove in the kitchen.

To leave, use the rabbit hole in the kitchen, then use the western rabbit holes twice, and climb the rope. 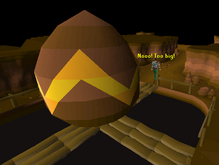 The chocolate egg proves to be a bit too big for you.

Return to Chocco, who will instruct you to place the egg on the egg cup in the southern part of the warren. The egg will grow a bit too big, and collapse into the maze below. Speak to Chocco again, and climb down the rope where you placed the egg.

You will find a Chocolate Chicken. Depending on which god idol you picked earlier, you will have to use different methods of killing the chicken; the tools required to do so are readily available on the ground. You can also kill the chicken by combat instead of using the methods listed below.

Once you've killed the chicken, return to Chocco. You will find out that you will also have to kill the chicken's mother, the Colossal Chocco Chicken, much to your annoyance. 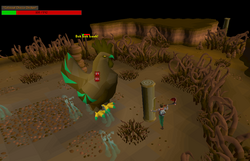 Like the chocolate chicken, you will have to use different attack styles based on what you chose as the god idol. It can also summon Chocolate Chickens to aid it in battle. Lower levelled players will need some food, as the Chocolate Chickens can hit fairly accurately.

The hitpoints the Chicken has varies from 60 to 594, depending on your combat level, and the damage you deal via non-combat means (lighting fires, chopping wooden supports and mining rock supports) will scale based on the Chicken's hitpoints.

Once the Colossal Chocco Chicken is slain, return to Chocco to receive your rewards. He will also inform you that the Chicken has respawned, and can be killed for extra rewards should the player wish to do so.

Killing the Colossal Chocco Chicken after the event will also give players additional easter eggs, as well as peaceful handeggs, holy handeggs and chaotic handeggs, which can be thrown to players much like gnomeballs.