Before you begin, bring a tinderbox, bucket of water, and two cabbages. Teleports to Lumbridge are also recommended. For members, having a way to reach Rimmington quickly (Rimmington teleport, or Home Teleport if your POH is located in Rimmington), as well as an Explorer's ring 2-4, necklace of passage, Crafting cape teleport, and access to a fairy ring will help complete the event quicker.

Speak to Eric next to the Rimmington church just south-east of Rimmington. If using fairy rings, code aiq will take players just south of the church.

He is planning a Halloween event for his niece and nephew, and the crypt of the church would be the perfect setting, but he needs help preparing the show. Agree to help him, and he'll tell you the church's crypt is locked, and that his old friend Father Urhney should have the crypt key. 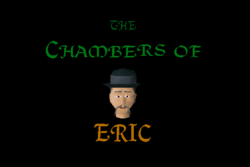 Welcome to the Chambers of Eric!

Make your way to Father Urhney's hut in the Lumbridge Swamp just east of the Wizards' Tower, and tell him that Eric sent you to fetch the crypt key. He will give you the key after telling you a little more about Eric, who he claims to be a very boring man. Return to Eric, who will take the key and open the crypt. Head down the trapdoor next to the altar, and you will enter the Chambers of Eric.

He will ask you to light the candles around the crypt. Use your tinderbox on the candles in the southernmost room. A tinderbox can be obtained from the two crates in the northernmost room. He will then ask you to get some cow blood from the Falador farm just north of Port Sarim. Make your way there, and speak to Sarah, the shopkeeper. She will claim that most people use red dye for blood decorations, but she'll give it to you after some persuasion. While you are still at the farm, you can find a bucket just west of the front door, use this on the sink inside if you don't have a bucket of water already. Next, pick two cabbages just east if you don't already have them.

Return to Eric again, who will splatter the blood as soon as you give it to him. Now, he will ask you to speak to Hetty in Rimmington for a spare cauldron, and that you should fill it with water and cabbages to make it appear like a witch's brew. Once you receive Hetty's empty cauldron, use a bucket of water and two cabbages on it to create a cauldron of water & cabbages. If you accidentally eat a cabbage (or two), you can pick another in the cabbage and onion patch north of Rimmington, or you can buy another at Wydin's Food Store in Port Sarim.

Return to Eric, and light the firepit under the cauldron using your tinderbox. Now, he will request you fetch a spider from the graveyard located immediately north of the church you're in. Speak to the spider, who, after a small conversation about being able to understand you, calls herself Eek and agrees to help you. After speaking to Eric, release Eek via the right-click option in your inventory.

Now, Eric will want some skeletons hanging around the crypt walls, and asks you to open the coffins to obtain them. Open the four coffins in the central room and respectfully and gently borrow four skeletons, and then use them on the wall fastenings within the room. 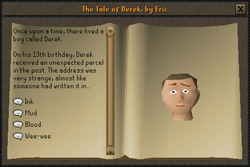 Writing a story with Eric.

Eric will now need a "properly imposing" lecturn to read scary stories from. Take the church lectern next to the altar upstairs and give it to him. Next, he will need help writing a scary story. Pick the most Halloween-appropriate options:

Eric unintentionally performs a ritual to summon the THING.

After completing the story, he will have you fetch his niece and nephew, Angel and Henja, from his sister, Anja. She is found in Rimmington just next to Hetty's house. Her children will follow you, begrudgingly, knowing their uncle to be very boring.

Meanwhile, Eric feels his story is not quite scary enough, and decides to read the ancient tome he used as a cover for his scary story, titled 'The Rituals of Dragith Nurn'. He reads an incantation from the tome, and accidentally summons the THING and animates the skeletons. 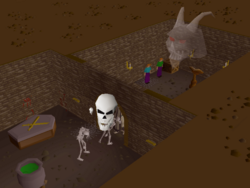 The player speaks to the Spirit.

While you have the children go into the crypt, Eric will appear, asking you to help him get rid of the THING by speaking to Father Urhney. Before that, go inside the crypt, and discover the THING is the Spirit of Fear. Make sure you go through all dialogue options with the spirit. If you miss something important, Father Urney will make you go back to it before helping you any further.(

Talk to Father Urhney who's located in the Lumbridge Swamp and who will tell you that you must frighten Fear with fear, frightening him so much he will depart. He will give you his clown outfit, which can be found in a crate in his house.

Dancing in front of the spirit.

Return to the crypt with the clown outfit equipped, and you will automatically perform in front of the spirit, scaring it away. The children will believe that this was all arranged by Eric, and as a result, now love him. Talk to Eric and you will automatically return to Anja's house, where she and Hengel will be grateful for Eric (and you) for giving their children a good time. Speak to Anja to finish the event and receive your rewards.