The 2019 Christmas event was the Christmas holiday event that began on 11 December 2019.

Speak to Santa in Varrock Square, just outside the general store. He will tell you that children are protesting because he has not given them any gingerbread gnomes. This is due to him passing on the responsibility of overseeing of Gingerbread Gnome production in Varrock to his son, Jack Frost. But as soon as he stepped in, production came to a stand still, hence the angry children.

When asked why he doesn't step in, he claims to be trying a new parenting technique in which he leaves him to learn from his mistakes. He asks you to go and talk to him, and tells you the bakery is south of the Apothecary.

Speak to the Worried Baker just outside the bakery. He tells you that he suddenly showed up and took control of the bakery, and when he and two other bakers tried to stop him, he locked the two of them. He managed to escape by distracting the Icelord he brought in to help make the Gingerbread Gnomes. After he escaped, Jack locked the entrance to the bakery.

Return to Santa, who decides that he must step in now. Rather than talk to him, he suggests that you free Anti-Santa from his prison in ScapeRune (the dialogue slightly differs if you participated in the 2015 Christmas event). Unable to come up with a better idea, Santa suggests that you tell Anti-Santa that he is considering setting him free in order to convince him. He then gives you a Scaperune teleport tablet to teleport into the bakery once you've freed Anti-Santa. He will then teleport you to Anti-Santa's prison cell in ScapeRune.

A long cutscene will occur in which you speak to Anti-Santa and manage to convince him to help you. You two will then teleport into the bakery, and Jack Frost will attempt to fight Anti-Santa, to no avail. He will then cry for his mother and teleport out, with Anti-Santa following suit, although he warns you that you're next after he deals with Jack. 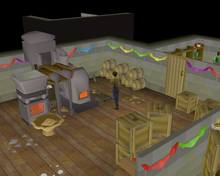 After the cutscene ends, you will hear Paul and Mary, the two bakers, locked behind the doors. The bakery storage key is found behind the cell doors where the Icelord is found. Because of its ice breath that blasts you backwards, Paul suggests creating a large Gingerbread Gnome to absorb the Icelord's ice breath, as he's seen Jack Frost use it to ice his Gingerbread Gnomes. 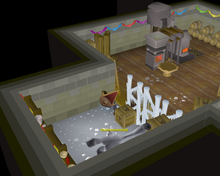 He will tell you the recipe for Gingerbread Gnomes, which is one festive flour, festive egg, cinnamon stick and ginger powder. He will suggest tripling the usual amount of ingredients to make a Gingerbread Gnome big enough. Take three of each ingredient in the storeroom to the south: Take the festive pots, then take the ginger powder from the red sack, the egg from the green bucket of eggs, the cinnamon from the barrel of festive branches, and the flour from the green sack.

Return to Santa, and you will tell him that you've sorted out the bakery and stopped his son with Anti-Santa pursuing him after his escape. He will ask whether you have made any Gingerbread Gnomes for him, and you show him the iced gingerbread shield that you used to protect yourself from the Icelord. You also tell Santa that the bakers are now using the Icelord to create the Gingerbread Gnome's icing, but Santa tells you that Icelord saliva isn't safe for consumption, and tells you to keep the giant gingerbread and tell the bakers later as well, though the latter is optional.

See 2019 Christmas event/Gallery for graphical variants that were used during the event.