The 2019 Halloween event is the Halloween holiday event taking place from 24 October until 7 November.

To begin, head to the chicken pen just north of Lumbridge, east of river. The holiday event icon

Speak to either Snailneck or Grasslegs by the chicken pen in Lumbridge, just west of the cow pen. Don't wear the Ghostspeak amulet, otherwise they won't understand you. You will ask what is going on, while they tell you to go away as they're guarding their prisoner, epic mager34. They claim that he had killed the both of them, and are now ghosts in the afterlife, so they have taken revenge. However, they are not actually dead and threaten to imprison you too as you try to point out that they're not actually dead. Speak to epic mager34, and he will tell you that he just came from Tutorial Island and has no idea what is going on. Offer to help him.

Speak to Bob just south of the Lumbridge castle entrance in the axe shop and ask him about Halloween; you can also speak to the Lumbridge cook inside the castle's kitchen. You will tell him that a new player has been captured by some goblins who think they've died over at the watermill. Bob will tell you that the goblins were trick or treating, Bob will then tell you to go ask Father Aereck about Halloween (if you spoke to the Cook, he will direct you to the shopkeepers in the Lumbridge General Store). They will proceed to tell you that those two goblins aren't dead and they were fighting over sweets.

Return to epic mager34, who has been passing the time by cutting the tree near him and has obtained level 15 Woodcutting. You will tell him what you've learned, with epic mager34 believing that they've lost their memory due to their fight. Speak to the goblins, and you will ask what weapon did their prisoner use to kill them. Snailneck believes he used a big red dragon-hammer, which confirms epic mager34's beliefs. 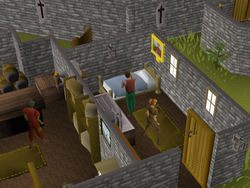 Creating the spooky outfit from some white bed sheets.

You will then ask him to help you come up with an escape plan. He will suggest that to outsmart them, you must think like them. You jokingly suggest you dress up as a ghost and act as a dead goblin as well, to which he believes is a brilliant idea. He will give you a knife and ask you to take a bed sheet from a bed around Bob's Brilliant Axes. The bed is found in the building just north of the shop; take some white bed sheets by interacting with the bed. Use the knife on the sheet to create the spooky outfit.

Speak to epic mager34 and tell him you've completed the outfit, then speak to the goblins (make sure you've completed the dialogue with epic mager34 before continuing). They will initially doubt you due to your dialect, which you quickly change to be more goblin-like. You will then tell them that they seem a little tired and offer a break while you "guard" the human prisoner. They will then ask you three questions to prove that you really are a goblin:

Once you answer their questions, they will give you a final task to prove yourself, to steal a precious item from the Lumbridge General Store. epic mager34 will ask about your progress, and suggests that to distract the shopkeeper, telling you that he saw a sack with black powder close to the furnace nearby. He will give you a tinderbox. 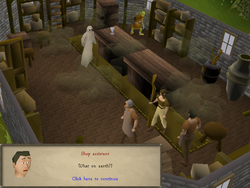 The player ignites the smoke powder, causing a distraction.

Grab some smoke powder from the sack just outside the building containing the furnace. Ignite the powder, and steal the shiny glass once smoke has covered the store. Return to the goblins, who will now believe you are a ghost goblin, and will trust you to guard prisoner while they take a break.

Meanwhile, mad melvin96 is attempting to pass the Al Kharid toll gate. He proceeds to kill Snailneck who drops a goblin mail, and Grasslegs, who now realizes that he is alive, only to be killed shortly after. mad melvin96 picks up the goblin mail, believing it to be a good armour upgrade, and enters Al Kharid.

Now gone, you and epic mager34 proceed to cast Lumbridge Home Teleport. Safely at Lumbridge, he will ask you for some advice on what to do next and thank you for your help.

Caution: If your total skill level is below 200, some rewards will not be received. A chat message will notify you at the end of event asking if you wish to finish the event or wait to finish, this allows you to meet the 200 total level criteria before claiming the rewards.