The event begins from the crossroads just north of Falador. The holiday event icon 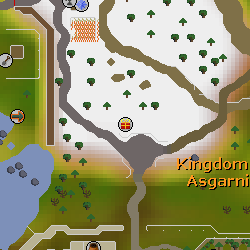 Speak to Scrubfoot by the large Christmas tree. The twin of Grubfoot, he is on a secret mission for General Wartface and General Bentnoze to spy on humans, seeking to find a weakness before the "great goblin invasion". Hearing that the humans have Christmas, he seeks to take it away from them, not knowing Christmas is actually a holiday rather than a physical object.

Pick the first or second chat option, and then tell Scrubfoot that you can't let him take Christmas, and then head to Goblin Village to talk to the goblin generals, who will be arguing about what colour to wear for the invasion. Ask them what their favourite thing about Christmas is, then ask them if they really don't know anything about Christmas. You will offer to help them celebrate Christmas in exchange for calling off the invasion.

Go through all the dialogue options for decorations, trees, gifts, and food. 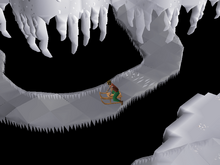 Sliding down an icy slope.

Go into the cave in the north-west corner of the village to enter a snowy cave. Pick up the sled and ride down the icy slope. Along the path, there are certain spots where you can go faster (icy skid marks) which restore 20 run energy, whereas the spots with rocks will slow you down.

When you get to the bottom, catch one red firefly and one green firefly, and exit the cave using the crack in the wall by the waterfall. 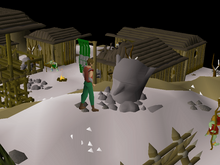 Outside the village, to the east, lies the goblin's sacred boulder. To move it, players must pick up the stick slightly south and use it on the boulder. This will cause it roll down the hill, into the village (though one goblin barely dodges it as it rolls past). 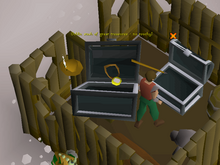 Searching for suitable gifts in the goblin stash of great treasures. In this example the item on the right (the iron spear) would make a good gift for a goblin.

Search the treasure chest in the south-western-most building, and select items that correspond to what the goblin general will tell you (e.g. "Goblins like Big High War God, meat and powerful things," "meat, fighting, and Big High War God"). Typical items to select are meat, weapons, and armour.

The correct choices to pick, if seen, are as follows:

When players have picked three items successfully, players will obtain goblin gifts, which they can take to the generals.

Climb down the ladder of the eastern house to access the village kitchen. Talk to the Goblin Cook, and he will tell you that there may be some ingredients left in boxes around the kitchen:

Inspect the cauldron to cook the food into goblin stew.

If you haven't already, give everything you've obtained to the goblin generals. They will be satisfied, believing a goblin Christmas to be superior to a human Christmas. In addition, they are too full to invade, so they will reward you with access to the icy caves you visited earlier as well as their sacred boulder. 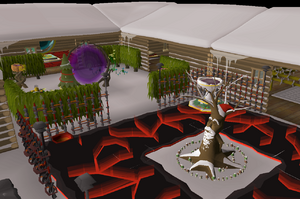 A player's house decorated in the Cosy cabin style.

See 2020 Christmas event/Gallery for graphical variants that were used during the event.