In the 2020 Easter event, players must help street magician The Disappointing Gelt, whose top hat is uncontrollably spewing out rabbits.

A player can start this event just south of the Falador Party Room. The holiday event icon 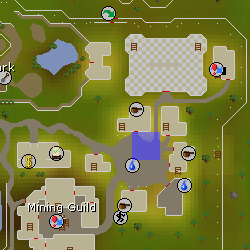 Speak to The Disappointing Gelt by the fountain of eastern Falador just south of the Party Room. He will explain that the reason in which so many rabbits have appeared around him is that they have been constantly jumping out without any signs of stopping after he had placed some runes in his hat and said 'Rabbaradoo'; investigating further, you find out that he had accidentally created a portal. Agreeing to help him, you place your hand in the portal and get pulled in, bringing you to the Rabbit Realm. 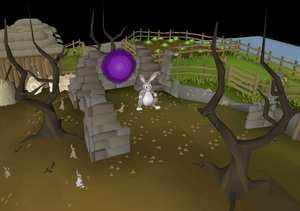 The player stumbles into the Rabbit Realm!

Upon arrival, you discover that you have transformed into a rabbit, and a guard instructs you to report to Duke Rabbacio. Head west to Bunbridge Castle, and speak to Duke Rabbacio on the 1st floor[UK]2nd floor[US]. You discover that he and the rest of the rabbits on the island live in a cult worshipping a Magic Egg, whom the Duke asked whether they should jump through Gelt's portal and it saying yes. Deeming the Duke insane, you must speak to Paws next door, who believes the egg is wrong and has made plans to make a fake egg that only replies negatively. 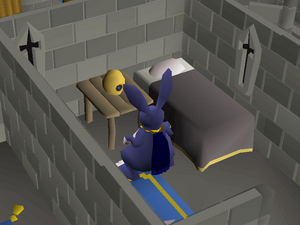 Duke Rabbacio and his Magic Egg.

He will ask the player to obtain the following:

Giving you the "fake" egg, he then permits you to ask the "real" egg one question as a token of his gratitude, in which you ask it whether rabbits should keep jumping through Gelt's portal. Satisfied with the egg's answer, the Duke sends the order for all rabbits to cease jumping through the portal, and let them know that you can speak freely with the other rabbits.

Exit the portal, and speak to The Disappointing Gelt one more time to complete the event.

After completing the event, players can return to Bunbridge to complete two "quests" for additional easter eggs. 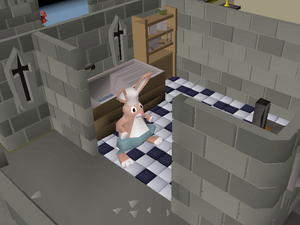 The Rabbit Chef in the castle kitchen. 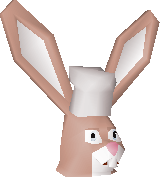 To begin the quest, talk to the Rabbit Chef on the ground floor[UK]1st floor[US] of the castle, inside the kitchen. He informs you that it is Egg Descendance Day tomorrow, and that he is supposed to prepare a big carrot cake for the celebration. However, he has forgotten to bring some of the ingredients required for the cake and asks for your help. Agree to help him, and he will ask you to bring him the following items:

Once players have the three items, return to the Rabbit Chef to complete the quest, which rewards five easter eggs. 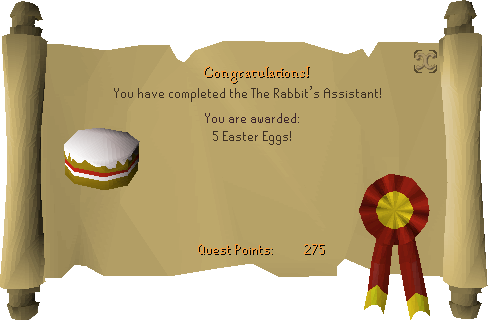 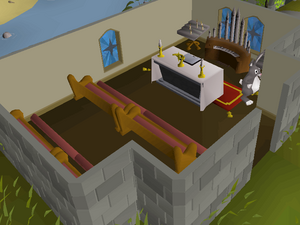 Father Buckerek in the church of the egg. 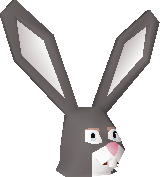 Talk to Father Buckerek in the church of the egg, just outside Bunbridge Castle. Tell him that you are looking for a quest, and he will tell you that there is a ghost goat haunting his graveyard.

Agree to help him, then head to small stone building directly south. Here, inspect the grave to find out that the ground beneath the gravestone looks disturbed. Next, inspect the grave closer, and Viktor the Restless Goat will appear before you. You will discover that it is unable to pass on to the next life because one of its horns is missing, in which it will point eastwards.

Cross the bridge towards the east onto the beach, to then pick up the broken goat horn.

With the broken horn retrieved, return to restless goat and give the horn back to complete the quest, which rewards another five easter eggs. 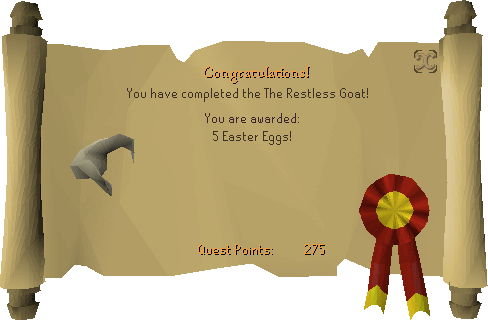 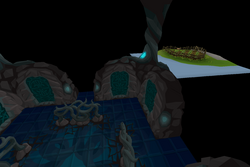 Mapping used in generating instances of The Gauntlet, visible from Bunbridge.
Retrieved from ‘https://oldschool.runescape.wiki/w/2020_Easter_event?oldid=14310650’
Categories: