The 2020 Halloween event is the Halloween holiday event taking place from 21 October until 11 November.

To begin, head to the woods just south-east of Draynor Village. The holiday event icon 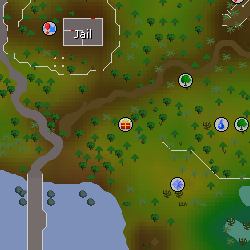 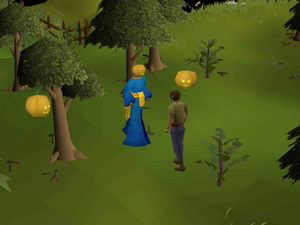 Talking to Rick, an unfortunate wizard.

Speak to Rick by the woods just north-east of the Wizards' Tower bridge. He has swapped his head with a pumpkin after casting a spell incorrectly, and needs your help re-attaching his head. Agree to help him, and he will tell you his head is in his room at the Wizards' Tower, on the 1st floor[UK]2nd floor[US]. Rick's room is accessed via the orange portal on the north side of the tower.

Search the bed to receive Rick's box. To unlock it, players must solve a riddle:

The answer to the riddle is 4 (since everyone leaves including the bartender). You will receive Rick's head upon solving the riddle. Bring the head back to Rick, who will then ask you to speak to one of the higher-ups. Speak to Wizard Mizgog on the 2nd floor[UK]3rd floor[US] (speaking to the other two will result in them telling you to speak to Mizgog), who will tell you that a witch named Eve is the only person who knows that kind of magic well enough to revert Rick's head to normal. 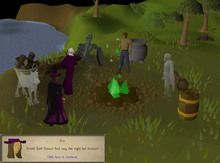 Eve arrives in Gielinor, ready to party all night.

Head to a small empty camp on the western end of Lumbridge Swamp (just south of where Rick was at the start of the event) and inspect the bonfire to trigger a cutscene. Eve will appear shortly, and will begin summoning a few friends: Yanes, Hogst, Yeldive, and Pouncer. Speak to Eve, and you will find out she already knows about you and Rick's predicament, but proceeds to party away. Dance by the fire, drink from the cauldron, and eat from the barrel, and speak to Eve again. She will give you an incantation to use on Rick's head, which should restore Rick to normal. 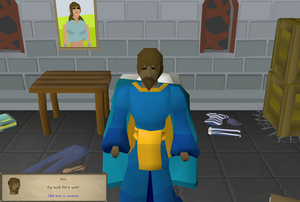 Rick returns to normal at last.

Return to Rick's room, and he will cast the incantation and restore his head to normal. 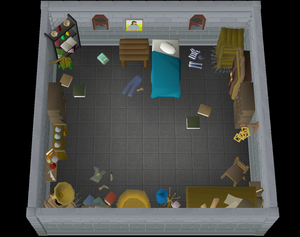