In the 2021 Easter event, players must assist Gregg in coming up with a new tradition for Easter, which he hopes will shift the holiday's focus away from rabbits.

The event can be started outside Ned's house in Draynor Village. The holiday event icon

Start the event by speaking to Gregg, next to the fence outside Ned's house. He'll tell you that due to Gielinor's associate of rabbits with Easter, it's difficult for him to be taken seriously in his other adventures, and suggests coming up with a new Easter tradition that he plans to celebrate by painting all of the brown doors in Draynor. He'll ask you to get him some paint from Aggie, which he offers to pay for with some pastel flowers and an IOU for 5 coins.

Talk to Aggie about the event, and ask her to make some paint. She'll give you a bottle of thick dye; head back to Gregg and show him the dye, and he'll use it to paint Ned's door plain cyan. You both agree that this is a bit boring, so Gregg will now ask the player to look for eggs to decorate with, leading your player to suggest speaking with the Cook.

Speak with Gregg to be teleported to the Lumbridge Castle kitchen, and talk to the Cook to receive some coloured eggs. Gregg will now ask for some wool, so meet him in the sheep pen just north of the Lumbridge General store and shear three sheep (Gregg will give you some shears if you don't have any). Give the wool to Gregg to be teleported near Thessalia's clothing store in Varrock.

Talk to Thessalia or Gregg in the clothes store, and ask for some ribbons. Thessalia doesn't have any ribbons, but will give Gregg a crate of offcuts instead. Thessalia will then suggest visiting the Sawmill operator for the planks, so meet Gregg at the Lumber Yard to the north-east and talk to him. 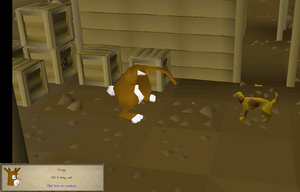 Gregg encounters a cat, and is assaulted by it.

Gregg will then sneak into the Lumber Yard, grabbing some planks before being chased away by a cat. After making it out, he'll use the stolen planks to construct a decorated door, and then teleport the player back to Draynor Village, where the easter decorations have already been put in place. Speak to Gregg once again to trigger a cutscene where the Wise Old Man explains that Ned's cyan door inspired the rest of the town to paint their doors for Easter.

Ned, Dionysius and Aggie have a blast decorating Draynor.

Since the village is already decorated, Gregg no longer has any use for the eastdoor he built, and since the propeller hat doesn't fit him, he hands it to the player as well. 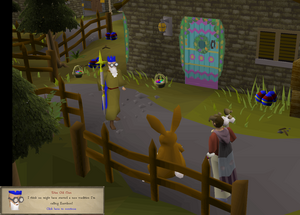 Bug:
Before the player has given the thick dye to Gregg or learned about the intent to paint Ned's door, the player can ask Ned one step too early for his permission to paint the door.

Bug:
After the player has given the thick dye to Gregg, Ned will thank the player for painting his door with extra colours and exclaims the door to be missing something, before the door is actually painted.

Bug:
If the player talks to the Cook immediately after painting Ned's door, the Cook will state that he gave rotten eggs to Gregg, but this is before Gregg ever made it to the kitchen.[note 1]