From Old School RuneScape Wiki
Jump to navigation Jump to search
The RuneScape Wiki also has an article on: rsw:2022 Christmas event

Begin the event by speaking to Guss Mistletoad. You can find Guss hanging around the red carpet on the road connecting Barbarian Village to Falador. The holiday event icon 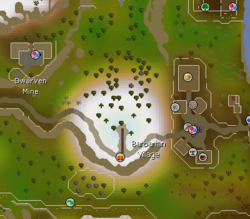 Head to the snowy area west of Barbarian Village to start the Christmas event. You will see a queue of NPCs waiting to enter The Nutcracker, Santa's prized pub, where only a select few can enter. At the end of the queue, speak to Guss Mistletoad. He desires to gain entry to the pub, but doing so requires winning the Festive Games, which he has a hard time winning, and so will ask you to help him win the games. Agree to do so to start the event.

Talk to Santa Claus by the Christmas portal, and you will ask for game times for you and Guss. However, to discourage dishonorable conduct, you are both given different game times. Return to Guss, and talk to Santa again. You will have to solve his riddle: "What do you get when you meet a vampyre in the winter?", to which the answer is "Frostbite", though players can proceed regardless of what they answer.

Before entering the Christmas portal, players must not have anything equipped in their cape slot, and are recommended to use the nearby bank deposit box to free up eight inventory slots. 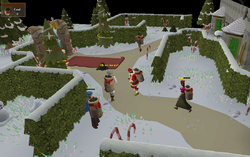 A player playing Pass the coal.

Upon entering the Christmas portal, you will arrive at the Nutcracker pub grounds. Talk to Santa's scribe to start the first game: Pass the coal. To win the game, players must pick up coal piles and give it to the other contestants in order to make them go above 100 Coal (overfill their status bar) and eliminate them from the competition. However, if players get over 100 coal in their sack, they will be eliminated and must try again. A pile of coal gives 20 coal, while the Large Pile of Coal gives 40.

After winning, talk to Santa's scribe to be given a riddle: "Their body is round, with a carrot for a nose. They love to be cold, from their head to their toes.", to which the answer is "Snowman". This time, players must correctly answer the riddle before proceeding. 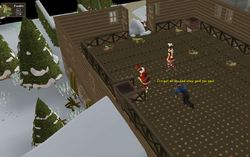 Head north-east to the large house and talk to the gnome inspector to start the second game: Gingerbread factory. To win the game, players must pick up gingerbread gnomes from the factory floor and place them in the gingerbread hopper. The first contestant to reach 250 points wins. However, the other two contestants will attempt to sabotage you:

Players can take the shattered gingerbread (red ones) and put them in the opposing team's hopper to sabotage them, gaining a small amount of bonus points in the process.

After winning, talk to the gnome inspector to be given a riddle: "I am tall when I am young, and I am short when I am old.", to which the answer is "Candle". 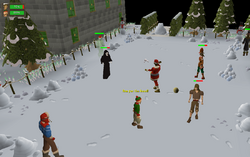 Leave the factory northwards and talk to the snowball champion. Guss will arrive shortly, and he will explain the third and final game to you: Snowball massacre. To win the game, players must take snowballs from the snowball piles, and throw them at the other contestants until their health bar is depleted to eliminate them.

While snowballs deal 10 damage, a golden snowball will occasionally spawn. Picking one up and throwing them will deal 50 damage, so it is recommended to take them whenever they appear.

Once all the contestants other than Guss have been eliminated, the snowball champion will initiate the Sudden Death Snowball, where both contestants will throw a snowball at the same time and whoever is hit loses. Here, players can choose to dodge the snowball or let it hit you, though the outcome is identical regardless.

Upon winning/losing, you find out that the winner of the Festive Games gets to bring a plus one to the Nutcracker pub, and you both gain entry. In the pub, talk to Guss to complete the event! 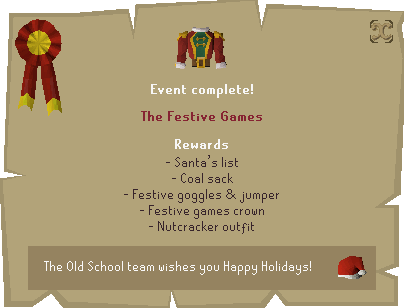 See 2022 Christmas event/Gallery for graphical variants that were used during the event.