The 2022 Pride event is an event that takes place in Old School RuneScape as a promotion of LGBTQIA+[a] inclusivity.

It is the second Pride event in the game's history, the first being the 2017 Pride event.

Speak to Gilbert by the field of grey flowers south-east of Barbarian Village, on the other side of River Lum. He is trying to come up ideas to give Misthalin more colour without his ideas conflicting with other people's preferences. He needs five seeds from flower traders to power up a spell to colour the grey flowers around him. He will recall one of two flower traders currently in the area, one of whom is "At the place where you turn essence into the power of the body".

The first flower trader, Aven, can be found at the entrance to the Body Altar north-west of Barbarian Village. She will give the player a legendary red rose and gorgeous orange lily seeds. She mentions that another trader can be found at an unspecific bank.

Return to Gilbert with the red and orange flower seeds, and he'll mention that the second flower trader, Wolf, is in Varrock, specifically by Varrock West Bank. Talk to Wolf for the beautiful yellow pansy and tenacious indigo iris seeds, and he will tell you that he sold the last of the Quality Violet Tulip seeds to someone at the Blue Moon Inn in southern Varrock.

Speak to the pair west of the picnic benches outside the Blue Moon Inn (they can be either the male couple Alan and Oscar or the female couple Sylvia and Marsha), who purchased the quality violet tulip seeds you need. They will tell you that they purchased them to help their friends nearby to the east to get together as a couple. They ask you to help them make the push in exchange for a seed.

Talk to the couple east of the picnic benches and help them sort out their awkward feelings, then return to the western couple to receive the quality violet tulip seed. 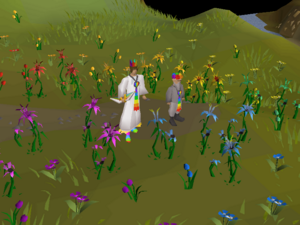 Return to Gilbert and give him all five seeds and watch the cutscene of Gilbert casting his magic, colouring the flowers around him. As a reward for helping him, he will reward the player with two cakes and a rainbow flower crown, as well as the rainbow scarf from the Gilbert's Colours event of 2017 if they do not have one.

The area in which a colourful magical force won't let players light a fire, set up a cannon, plant mithril seeds, nor set up a trap.