The 20th Anniversary event was the celebration the 20th anniversary of RuneScape. The event involved helping a green Gnome Child who had been accidentally summoned by Wizard Grayzag to return to the Realm of Memories.

During the event, several of the cities across Gielinor were decorated in their centres with lines of flags, and several boxes of fireworks, as well as some banners showing the number 20, celebrating the 20-year anniversary.

To start the event, speak to Wizard Grayzag in the Wizards' Tower. He will ask you to run an errand for him. He is trying to expand his imp army to include more demons like the one in the cage next to him. In his attempts, he accidentally created a portal to the Realm of Memories instead of a time travelling portal, which made the Gnome Child appear. Talk to the Gnome Child, and he will explain that he needs to collect some artefacts of RuneScape's history, and you need to guide him to the places where he can find them. Agree to help him in his journey, and he will tell you to go to the Wise Old Man first to get his Blue partyhat.

Make your way to the Wise Old Man in Draynor Village and ask him if you can have his Blue Partyhat. The gnome child will convince him that times have changed since he stole it in the Draynor Bank Robbery. The Wise Old Man then agrees and claims to have plenty of spares anyway. The gnome child then tells you to visit Hans, who is walking around the Lumbridge Castle, to obtain a navigational chart. Talk to Hans, and without needing much convincing, he will give you the chart, which pops up as an interface. This interface can simply be closed to move on to the next step. 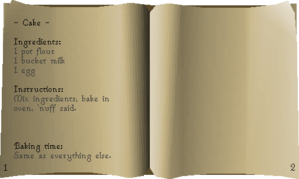 The cookbook as used by the Lumbridge Cook during Cook's Assistant.

Enter the Lumbridge Castle and talk to the Cook to ask him for his recipe book. The cook will complain about several things that make his life inconvenient, such as not having a Grand Exchange in Lumbridge, his food burning, and some other "quality of life" changes. After this rant, the cook will agree to give the gnome his recipe book, since he knows the recipe by heart now, even though he never successfully baked a cake in his life. The gnome child then tells you to go to Bob in his axe shop.

Walk to the axe shop and talk to Bob to ask him for his autograph. Bob shows his aversion to anything that's not a human, and responds by saying he normally doesn't serve 'his kind' in his shop. The gnome child will then praise Bob for his heroic deeds such as defeating the Dragonkin, confusing the axe salesman with Bob the Jagex Cat. If you then try to explain this is the wrong Bob, the gnome starts talking about a conspiracy theory, asking if it is just a coincidence that this man has the same name. Even if you insist on this being a coincidence, the gnome child still wants the autograph. Bob will sign a flyer and hands one to the gnome child, and gives you one as well. This flyer may be dropped right away.

The next step is The Thing in Fred the Farmer's sheep pen. The gnome explains that initially, Fred talked about 'The Thing' being in his sheep pen, without there actually being any mysterious creature. But then, after the release of the Cold War quest, there suddenly was a weird creature, and it was even given a purpose. Because of the long history this fake sheep has had, it has historical significance, so the gnome child needs you to shear some wool using shears. Attempt to shear the fake sheep with the gnome following you to actually succeed in shearing just a small bit, before the Thing flees from you.

The next artefact is a feather from Ernest, from when he was a chicken. Visit Draynor Manor, go up the stairs, then up the spiral stairs to the west. In the eastern room, take the 'odd feathers' lying next to the strange machine, or pluck the chicken if you have not completed Ernest the Chicken. You will obtain a feather, which you hand to the Gnome Child. To leave the manor, you can go out the eastern door on the ground floor. Talk to the gnome (right click) and he will tell you he needs a cabbage from the Falador cabbage patch. From the early days of RuneScape, the cabbage has been renowned as a "wondrous source of brassican goodness", so the gnome child will need a freshly picked one to use as an artefact.

Go to the Falador cabbage patch (you can use the teleport of the Explorer's ring 2 or higher for this without losing the gnome) and pick a cabbage. The gnome will take the cabbage (if not, make sure you talk to the gnome). Attempting to pick a cabbage from the Draynor patch triggers dialogue where the gnome child states he doesn't want that one. Talk to the gnome again, and he will tell you he has everything. Return to the Wizards' Tower to complete reopening the portal to the Realm of Memories. Speak to the gnome, and he will chant mysteriously to reopen the portal. After finishing the dialogue, you will step into the portal and get greeted by the gnome child, who will give you the event rewards. Feel free to look around in the realm and see several old graphics of monsters from the early days of RuneScape 2.