The 3rd age bow is a part of the 3rd age range set. It is a possible reward from elite and master Treasure Trails and cannot be made via the Fletching skill. Requiring 65 Ranged to wield, the 3rd age bow can fire arrows up to dragon arrows at the same speed as that of a shortbow whilst retaining the range of a longbow. The bow has an attack range of 9. Longrange increases attack range by 1. (10 is the maximum attack range)

It is considered to be one of the more useful 3rd age equipment pieces; it can for example be exploited to shoot faraway monsters during Fight cave speed runs and is also valued in the Barbarian assault attacker role. 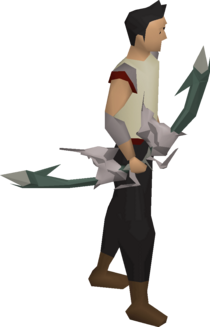