A Kingdom Divided is an upcoming quest first announced at RuneFest 2019. The quest is a continuation of the Great Kourend quest series.

In A Kingdom Divided, players will investigate the hidden corruption within the Kourend Council, and discover a much deeper conspiracy hundreds of years in the making. 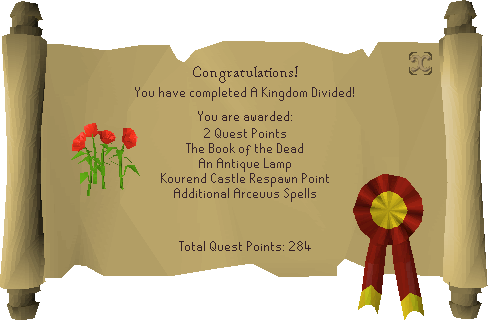 On 12 May 2021, a video trailer made by Mod Surma was released to promote the quest, announcing its release in June 2021.

On 19 May 2021, the quest was added to the Quest List interface with the text in grey (A Kingdom Divided). When the quest was clicked on, the usual interface opened which formally announced the quest's release date:

Around 17:42 (UTC) on the same day, players in various areas of the game had their screen rumble with accompanying messages in their chatbox, depending on where they were: