A Night at the Theatre

A Night at the Theatre is a stand-alone quest in which the player assists the Mysterious Stranger in obtaining information about Verzik Vitur and the Theatre of Blood, culminating in completing a run of the Theatre.

While the Theatre is normally quite difficult, the quest offers the option of being able to play in Entry Mode, which is considerably reduced in difficulty and is intended to have the player learn the mechanics of the raid.

Behind The Scenes[edit | edit source]

Talk to the Mysterious Stranger by the entrance to Ver Sinhaza. He will tell players about the information he has gathered about Verzik Vitur through mercenaries who've survived the Theatre of Blood; specifically, her unique abilities, which are unheard of among vampyres, and the method in which she acquired them.

One of the observations the Mysterious Stranger has is from a mercenary who claimed a set of purple spiders eggs fell out of Verzik, and discovered the eggs were of a variant of nylocas, a species of arachnid from the vampyre's homeworld of Vampyrium, that has not been documented before. 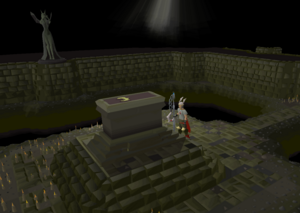 In order to find out more information about them, you are asked to retrieve the corpse of Ranis Drakan, who you killed during the events of A Taste of Hope, so that the Stranger can relive his memories and attempt to find useful information. 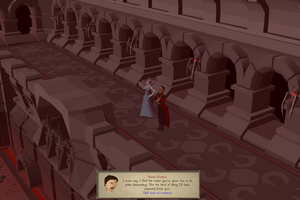 Ranis and Verzik talk about The Maiden of Sugadinti.

Ranis Drakan is buried in a crypt beneath Ver Sinhaza, whose entrance can be found just north of the Stranger; bring a saw and an Ivandis flail or blisterwood flail, as you'll need to kill a vyrewatch. Head down these stairs, and kill a vyrewatch to obtain a crypt key, which is used to open the gate to Ranis' coffin. Search the coffin to cut off Ranis' head, and return to the Stranger to hand him the head. The Stranger and you will then view one of Ranis' memories, where he gifts Verzik some spider eggs from a nest of araxytes, another unique species of arachnids, north of Darkmeyer, to assist her in her nylocas breeding program.

After viewing the memory, the Stranger will ask you to investigate the spider nest and recover some of their eggs. Head north-west of Slepe to the cave entrance found there, and enter the nest. Walk north towards the end of the nest to find a corpse just behind a large egg sac, and search it for a sticky note. When read, the note mentions Daer Krand will have some sulphuric acid that would be able to burn through the egg sac.

Daer Krand can be found within the Sisterhood Sanctuary, a large subterranean complex beneath Slepe. The entrance to the Sanctuary can be found in the building next to the church. Once players climb down the stairs, walk towards the main area of the Sanctuary, and make your way upstairs in the Sanctuary's eastern wing, just north of The Nightmare's arena. Talk to him about sulphuric acid, and you'll inform him that his assistant has died trying to obtain some spider eggs. In exchange for bringing him news regarding his assistant, he will give you a vial of sulphuric acid. 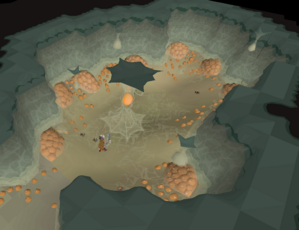 The chamber housing the egg sac

Head back to the spider nest and use the sulphuric acid on the egg sac to obtain some strange spider eggs. You will be attacked by multiple spiders of levels 87 and 123, who can inflict venom. Fighting them is not necessary; simply teleport to Ver Sinhaza using Drakan's medallion, and cure your venom afterwards. Talk to the Mysterious Stranger to view more of Ranis' memories. In these memories, you will see the results of the araxyte eggs Verzik was gifted, where she uses them to breed two new variants of nylocas. Needing regenerative abilities to be bred onto the nylocas, Ranis advises Verzik to try using the bark of a hespori, a rare carnivorous plant bred by Queen Efaritay, who used them as living weapons against the vampyres in defence of Hallowvale during the God Wars.

Get Into The Grove[edit | edit source]

To find out more about the role of the hespori in the creation of the Theatre's monsters, you will need to acquire some bark from the plant. You will recall Filliman Tarlock, now a Nature Spirit, who might be able to help you find one. Contact the Nature Spirit Filliman Tarlock in his grotto (fairy ring code BIP).

Make your way to the Nature Grotto within Mort Myre Swamp, and ask Filliman about the hespori. He explains that they are very rare, and that you can find one "to the north-east, on a small island in the swamp". Head to the island directly east of the Grotto, just west of Castle Drakan. Cross the stepping stone and attempt to chop the hespori. The fight is similar to the one against the hespori that players grow in the Farming Guild. Should players die during the fight, their items will be placed in a gravestone just outside the instance, like a normal death. 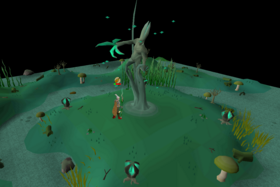 A player shortly after their promise not to damage the rare hespori.

After killing the hespori, chop it to obtain a hespori bark, and return to the Mysterious Stranger to view more of Ranis' memories, where Verzik shows Ranis the final result of her breeding program: the Nylocas Queen. Though small, it proceeds to bite her but surprisingly dies immediately afterwards, much to her disappointment.

Though the Stranger concludes that the Nylocas Queen's bite was responsible for Verzik's new abilities, and that he has the necessary assets to work on weapons and techniques to use against her, you believe that there are some missing information that could clarify her transition. With no more memories from Ranis that prove useful, the Stranger is forced to enter the Theatre of Blood, and asks you to help him reach Verzik so he can make contact with her to gain her memories. 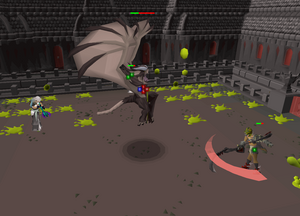 A group of players fighting Xarpus, the last of the Yarasa race and its king.

You will have to defeat 6 bosses to progress:

Like in the normal Theatre, the bosses must all be defeated in one session; losing or leaving the raid means it must be started over. If played in entry mode, the bosses have significantly reduced stats, and players are given three attempts to defeat the bosses. After three deaths, the game is over and the player is kicked out, with their items being retrievable from a chest in the courtyard of Ver Sinhaza for a fee of 100,000 coins.

In entry mode, your health and prayer are replenished after defeating each boss, meaning that it may be wise to avoid eating to full if a boss is almost dead. Keep this in mind as you progress through the Theatre.

After defeating Verzik, she will transform into a bat and flee, but not before the Mysterious Stranger touches her and attempting to gain access to her memories. After receiving your rewards from completing the Theatre of Blood in the treasure vault, return to the Stranger at the Theatre's entrance via the teleport crystal.

Talk to the Mysterious Stranger once more, and you'll both view a memory not from Verzik, but from Vulcan Orvoros, who was Verzik's doctor and wrote a record on her illness after the bite from the Nylocas Queen. It is revealed that after the nylocas bite, a Nylocas Queen had been growing inside of her, eventually emerging from her body and killing her. The horrified Doctor Orvoros, who witnessed the queen's birth, was killed shortly after.

The Stranger concludes the Verzik Vitur you fought in the Theatre was not actually Verzik, but the Nylocas Queen, who plans to overthrow the vampyres and rule Morytania in their stead. The Stranger will then explain his associates are all made up, and he has been on a mission for his master. Deeming you trustworthy, he will put you in contact with this master, who will explain that you've gathered all the information they need to combat the nylocas threat. He will then instruct the Stranger to reward you for the work you have done. 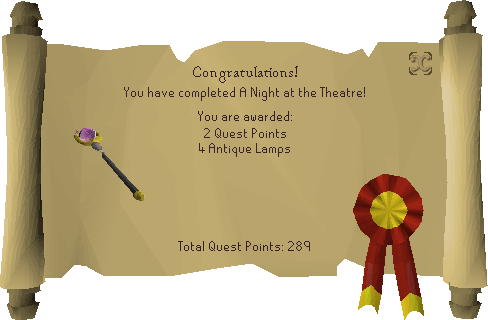