A Porcine of Interest

A Porcine of Interest is a quest designed to introduce players to the Slayer skill. It added a new slayer master, Spria, to the game as well as a new monster, the Sourhog.

{"requirements":"None","desc":"Ah, the Falador Farm - filled with cabbages, cows, and even a sleepy sheepdog. A peaceful place, where you can learn to churn butter, give a dog a bone, or purchase various Farming supplies. What was once a place of happiness, joy and wholesome dairy goods has of late become dominated by a vile presence. Each morning Sarah wakes to find her crops destroyed, her cows cowering, and her loyal sheepdog looking... sheepish.<br><br>\nShe's had enough, but she thinks she's got the culprit on the trot. Can you help her track down... A Porcine of Interest?","difficulty":"Novice","kills":"[[Sourhog]] (level 37)","name":"A Porcine of Interest","start":"Read the town [[Notice board (Draynor Village)|notice board]] in [[Draynor Village]], behind [[Fortunato]]'s [[Wine Shop]].","length":"Very Short","items":"* [[Rope]]\n* [[Knife]] or a [[slash weapon]] (except [[abyssal whip]], [[abyssal tentacle]], or [[dragon claws]]) (obtainable during the quest)"}

Begin the quest by reading the notice board on the wall behind Fortunato's Wine Stall. A bounty on a "troublesome monster" by Sarah will catch your eye. Begin the quest, and make your way to Sarah in the Falador Farm.

Talk to Sarah, who explains that she was making her monthly delivery to The Sheared Ram when she was attacked by a hulking monster near the crossroads north of Draynor Village, where she lost her cart of farm produce.

The scene of the crime[edit | edit source] 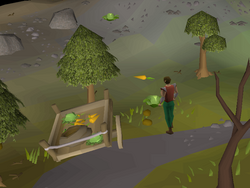 The produce cart which Sarah left behind during the attack.

Make your way to the crossroads north of Draynor Village and investigate the cart there. Then, follow the trail of farming produce and broken dead trees north-east until you reach a strange hole next to the River Lum. Use your rope on the hole and climb down.

Upon entering the cave, walk to the very end of the cave, where you'll find a skeleton. Inspect the skeleton to find that it has been gnawed clean, alongside a scrawled note:

Speak to Spria, who tells you that the monster is a Sourhog, a creature made through a magical experiment and whose saliva is extremely acidic. She will give you a pair of reinforced goggles to protect you from its acid attack, and tells you that its thick hide gives it a resistance to slashing and magical attacks. She will tell you to kill the sourhog and claim Sarah's bounty, and return to her once you do so. 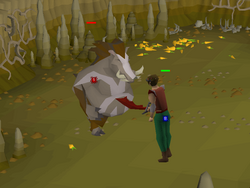 A player fights the Sourhog.

Return to the Sourhog Cave, and defeat the Sourhog. It is level 37, so lower leveled players should bring some food. As stated by Spria, it is weak to stab and ranged-style weapons. To kill it with rings of recoil, 1 damage must be dealt by the player for kill credit. This particular Sourhog is immune to poison.

Return to Sarah, where she'll reward you with 5,000 coins and tell you a strange woman in a hood came to ask her about the job. The woman she refers to is Spria, whom you were told to return to once you collected your bounty.

Speak to Spria in her house in Draynor Village to finish the quest. 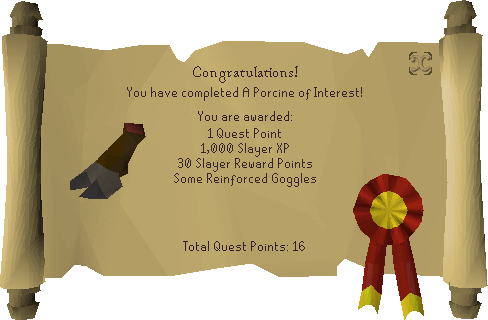