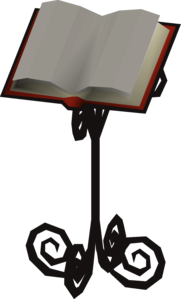 A Shayzien State is a book mounted on a lectern, found in the western part of the Library Historical Archive. It cannot be removed from the lectern it is on.

The book contains the Royal Charter written by King Shayzien III, which abolished the Royal Accord of Twill and formed the State of Kourend, which would serve the monarchy, govern revenues and mobilise forces.

Citizens of Kourend, the following Royal Charter has been written into law by His Royal Highness King Shayzien and is effective immediately.

Note that all citizens of Kourend are bound by law to abide this Royal Charter and any person found in violation of the Charter will be charged with High Treason.

I. The Royal Accord of Twill and all agreements bound within cease to exercise authority in all regards to governance of the Kingdom of Great Kourend.

II. The Right of Succession is no longer observed and all titles held within bare no right of governance.

III. The Kingdom of Great Kourend is henceforth governed by the newly formed State of Kourend.

IV. The State of Kourend exists to serve the Monarchy.

V. The Monarchy bears sole responsibility for the appointment, dissolution or replacement of the Head of State.

VI. The role of Head of State belongs to the Monarchy until such time that statement V may be actioned.

VII. Governance of revenues is to be managed by the state.

VIII. Mobilisation of forces is to be governed by the state.

IX. The territory of the Kingdom of Great Kourend and all assets within are property of the state.

X. Discussion, demonstration or acts that seek to violate this Royal Charter are deemed an act of High Treason.