A Soul's Bane is a combat-focused quest focused on trying to find the lost son of Launa Talvoy. The son disappeared in a mysterious rift near the Dig Site, and was slowly driven to madness over the many years stuck in the rift.

{"requirements":"The ability to defeat level 45+ enemies.","desc":"A rift in the ground has opened up releasing all manner of strange monsters into the lands near the Digsite. A sorrowful mother waits at the top of the rift for her long lost son, who has been missing for 25 years. You can journey down into the rift for an adventure full of twisted monsters all created from the mind of a young boy driven to madness through incarceration.","difficulty":"Intermediate","kills":"Multiple level 40 to 46 enemies","name":"A Soul's Bane","start":"Go east of [[Varrock]], through the gate by the [[Earth Altar]] and just south of there, speak to [[Launa]].","length":"Short","items":"*[[Rope]]\n*Some form of a [[weapon]]"} 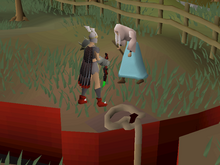 Launa at the rift.

Note: During the quest, be careful not to click during any of the cutscenes, or else you'll be teleported out and forced to go through the cutscene again.

Go east of Varrock, through the gate by the Earth Altar—just south of there, speak to Launa (Digsite Pendant teleport and then run north-north-west). Alternatively, take a glider to Digsite. She explains that she is looking for her son, Tolna, and her husband who both went down into the rift. Offer to help her find them, then use a rope on the rift and climb down. There are four "rooms" which you need to get through to complete the quest, as well as a final boss room. Each room will have multiple enemies for you to kill in order to progress to the next room.

It's recommended to have food and antipoison, but you can leave to get food or supplies at any time during the quest. However, you will have to start over in the room that you were in when you left if you had not completed the room before leaving.

Note: If you log out, you lose your progress and appear above the rift next time you log in. Also, completing the Rage section awards 40 attack experience.

The weapons rack for killing the angry monsters.

This room represents Tolna's anger by frustrating players because they sometimes have trouble hitting monsters with certain weapons.

This room has four types of monsters that must be killed to fill a rage meter. When you enter this room, you should see a weapon rack which contains four types of weapons, each correlating to a specific monster. The correct weapon will deal normal damage multiplied by 10. The right combinations are as follows:

The player, outraged, kills all the remaining monsters.

Tolna leaves the streets of Varrock in search of a more lucrative life.

Unwield your own weapon and select any of the weapons from the rack and wield it. Only one weapon can be taken at a time. Now kill the specific monster for that weapon.

Players can do large amounts of damage on these creatures, but no experience is gained. Each creature killed raises the "rage level" bar at the top of the screen. After several kills of the player's choice of angry creatures, the bar will reach maximum and the player will yell, spin, and kill all remaining monsters in the room.

A cutscene will then play, in which Tolna leaves his mother for a more lucrative life, and players can then exit out of the rage room near the east end of the cave and go into the next room.

This room represents Tolna's fear by giving players a frightening jolt when the player doesn't know whether or not a Fear reaper will attack.

In this room, you have to search the outer walls for dark holes. In some of them, you will find Fear reapers which you have to kill in order to progress. There will be a small "jumpscare" when you search the hole. You have to kill around five or six before your character will state that they are no longer afraid, and you may proceed to the next room. 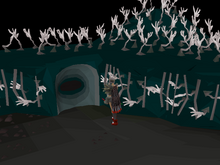 You must look into the dark holes. Prepare for a small shock.

Note that you can't keep searching the same hole over and over again. You will need to move around the room looking into each hole in sequence and starting over once they have all been looked-into. Depending on your luck, it will take approximately 4 or 5 round trips to complete 5 to 6 kills.

You will see a cutscene after the last kill. After that, you can enter the black hole (shouldn't be so black anymore) to the west.

This room represents Tolna's confusion by flabbergasting the player because doors lead nowhere and some beasts can't be hurt. 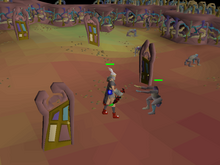 If you're doing 0 damage, then the creature is an illusion.

In this room, there are several confusing doors. There are also five Confusion beasts but only one of them is real at the time—others are illusions, and you will not inflict any damage on these (but you will get Combat XP). The illusions will just disappear after you hit zeroes on them eight times. You can keep attacking the beasts until you find the real one, which you will actually damage and kill, or disengage by running to the opposite corner, then attacking another one.

Once you kill the real one, one of the confusing doors will vanish, and the rest of the beasts will respawn. Repeat this process until only one door remains. Each kill will remove one non-working door.

Note: Ranged or Magic is best for this step, as the beasts use a ranged attack. When using Melee, they will also use a melee attack that has a chance to poison (use your throwing knives if you brought them because they make for speedy kills on the illusions). The illusions will chase you and keep you from attacking any of the other monsters while you are still in combat with an illusion. Either run to a far side of the room until they lose interest, or keep hitting them until your character says something about it being an illusion all along and they disappear.

Additional note: There may be an issue with the quest—if you don't see any monsters when you enter the room, just log out and log back in.

Additional note: Items left on the ground will disappear when the cut scene ends, pick up any valuables before killing the final Confusion Beast. 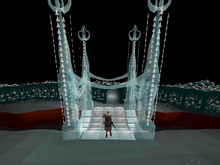 The hope bridge that appears after killing all the hopeless creatures.

This room represents Tolna's hopelessness because some players give up when the Hopeless Creatures die and the bridge does not appear.

In this room, you'll find five hopeless creatures. Each monster needs to be killed three times each to make them die. Be careful of eating as 75% of the monster's health will be restored. Moreover, if they are poisoned, the poison effect is lost when they reach their next phase. Once they have all died, the Bridge of Hope will appear. After crossing the bridge, go through the exit, and you'll see a short cutscene. 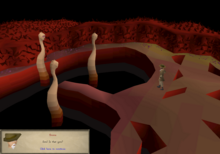 Tolna, a three-headed beast, is in the final room. You will have to kill his monster form in order to revert him back into a human. Beware, as this is a multicombat zone, so all three heads will attack you at once. They use a ranged attack from a distance and the northern head will very rapidly melee when up close. They are not very strong, but they attack quickly and will poison you, so bring antipoison and a decent amount of food. The three heads are very easy to beat if you use Ranged or Magic. (If you use range without an accumulator - you will not be able to get your arrows back).

Once you have killed each head and Tolna has become human again, talk to Tolna, and he will take you back to the surface. Talk to him again and he will reward you.

Tip: Re-enter the dungeon right after completing the quest to complete a medium Varrock Diary task. 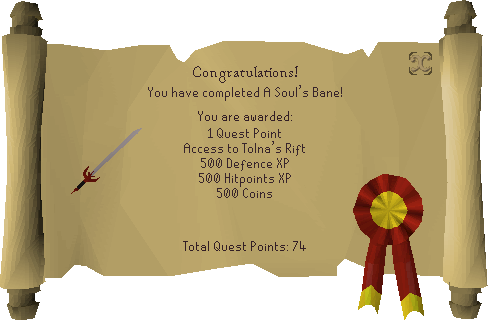 Completion of A Soul's Bane is required for the following: