A Tail of Two Cats

From Old School RuneScape Wiki
Jump to navigation Jump to search
The RuneScape Wiki also has an article on: rsw:A Tail of Two Cats

A Tail of Two Cats is a quest about the life of Bob the Cat. It is the first quest to feature Robert the Strong and introduces the Dragonkin.

You do not need to have your kitten or cat following the entire time—simply keep it in your inventory throughout the quest, and it will jump out to participate in necessary dialogue, and then you can pick it back up again to avoid it becoming overgrown. Equip your catspeak amulet, and start the quest by talking to Unferth, who can be found in east Burthorpe in the house south of Dunstan. After starting, talk to Hild in the nearby house north-east of Unferth. She will enchant your catspeak amulet if you give her five death runes. You can now open it to find Bob's location. It works somewhat like a compass - when facing north, click the left or right whiskers to control the interface and point it in the right direction. When you see the central cat's eyes light up, go in that direction to find Bob. He can be anywhere in RuneScape. However it is recommended to pick a common spot where Bob is found, and then world hop. He is commonly found at the Varrock anvils (south of the Varrock west bank, not the armour shop anvils). 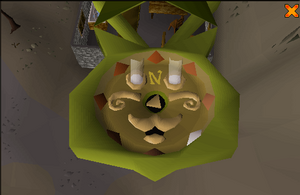 The interface of the Amulet of catspeak (e). This specific picture shows that Bob is south-east to the player's current location.

After finding Bob, talk to him. He will tell you that he's in love with Neite, but she has no idea what his origins are so she's not interested in him. Talk to Gertrude (located south of the Cooking Guild, West of Varrock) about Bob's family. While there, your cat will tell you to research a warrior called Robert the Strong.

In the Varrock Palace library, talk to Reldo. He will tell you that Robert the Strong was much taller and stronger than any other man of his time. His longbow was six feet tall, and he fought immortal monsters known as the Dragonkin. He fought alongside a black panther.

Return to Bob (who might have changed location, use the enchanted Catspeak amulet to locate him). You and your cat will try to convince Bob he is Robert the Strong. Your cat will remind you of the fact that the Sphinx knows how you were hypnotised, so perhaps it can hypnotise Bob. 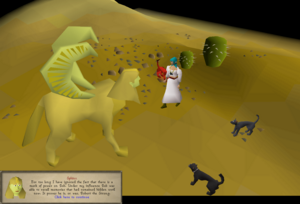 The Sphinx talking to Bob the cat in the desert.

Recommended items: Nardah teleport AND coins for the magic carpets (and ring of charos for discounted rides) OR Desert clothing AND waterskins AND 80gp if you are buying the desert outfit in Sophanem
Additionally you will need a games necklace if you decide to skip the cutscene

Also: you can use the pharoh's sceptre to get here faster.

If you haven't gotten the desert outfit, you can buy it from Raetul and Co's Cloth Store., which can be found east of the Sphinx.

Talk to the Sphinx in Sophanem. A good way of getting there is to take a magic carpet to Pollnivneach from Shantay Pass and then to Sophanem using Pollnivneach's southern carpet - the Sphinx is south-east of the northern pyramid. Ask her for help, and after a bit, you'll have the option to view a five-minute cutscene or get a brief summary of what happens. If you choose the brief summary, you won't be offered the option of being teleported to Burthorpe.

During the cutscene, the Sphinx will teleport Bob to Sophanem and hypnotise him. Bob, thinking back on his earliest memories, recalls himself as Robert the Strong. He sees himself looking over at a tower beside Odysseus, followed by a battle between them and a dragonkin; the dragonkin manages to slay the panther and weaken Robert, but is killed by an immensely powerful attack by him.

After the cutscene, the Sphinx teleports Neite to Bob, who will be impressed and fall in love with him. Bob will tell you to keep his owner busy by doing his chores, and you will be given the option to teleport back to Burthorpe, or stay in Sophanem.

Go back to Unferth's house in Burthorpe and do these chores: 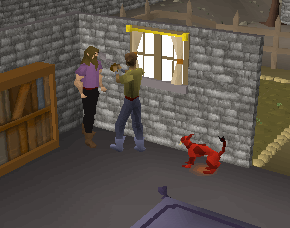 One of the chores Bob asks you to do while he is gone.

After you've done all of this, talk to Unferth again. He'll tell you that he's very ill and must see a doctor or a nurse. Talk to the Apothecary in Varrock (located in the south-west of the city). He will tell you that Unferth is a hypochondriac - he thinks that he's sick all the time even though he really has been tested for illnesses and it's all in his head. You need to use a placebo on him - pick a doctor's hat or nurse hat from the Apothecary, and wear some white robes (princess robes and graceful outfit don't work).

Go back to Unferth's house, and give him a vial of water. His illness will clear up. Note: You can't be wielding a weapon/shield; otherwise, Unferth won't believe you.

Using your catspeak amulet, find Bob again and talk to him. He may have moved to another of the other locations mentioned above, or he may be in the same location as before. You'll see a cutscene showing all the adventures Bob takes Neite on, including a magic carpet ride in Sophanem, a conversation between Bob and the King Black Dragon (a player spoof known as R4ng3rNo0b889 also tries to attack the dragon, but the dragon kills him instantly), and a journey on the Fishing Trawler ship.

After the cutscene, you will be teleported in front of Unferth's house. Talk to him to get a present from Bob, finishing the quest. 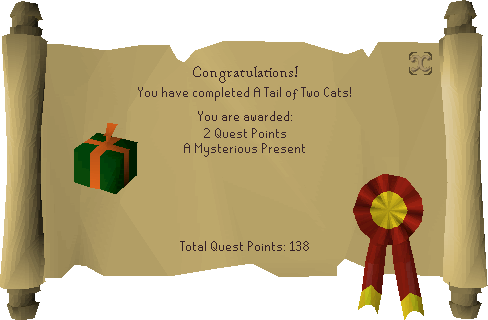 Completion of A Tail of Two Cats is required for the following: