A Taste of Hope/Quick guide

From Old School RuneScape Wiki
< A Taste of Hope
Jump to: navigation, search

Items required: None
Recommended: Pickaxe, Ectophial, and 20,000 coins (to travel quickly to the Theatre of Blood via Andras)

Start this quest by speaking to Garth, outside Ver Sinhaza (the Theatre of Blood), which is located on the eastern side of Meiyerditch.

The myth of Serafina[edit | edit source]

Items required: Emerald, chisel, 3 air runes and 1 cosmic rune, and Rod of ivandis (very important, you must receive Flaygian's notes before you can reclaim the Rod of Ivandis from Veliaf)!
Recommended: Morytania legs 3 or 4 for quick transport to southern Meiyerditch

The Taste of Hope[edit | edit source] 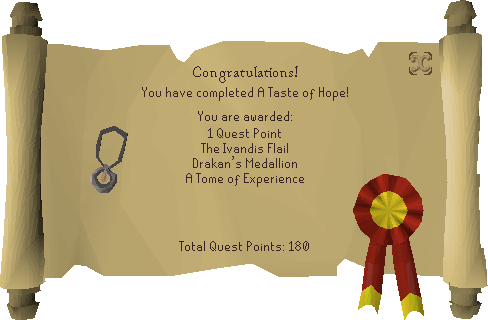 Completion of A Taste of Hope is required for the following: