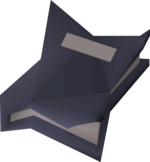 Ablenkian's escape is a book that can be found in the library of the Myths' Guild after completing Dragon Slayer II.

The book tells of a Dragon rider named Ablenkian, who along with all the other dragon riders, were branded traitors by both Zarosian and Zamorakians at the end of the Second Age, and was presumably killed by Ripper Demons.

The following text is transcluded from Transcript:Ablenkian's escape.

By my brothers and sisters and by those who swore to battle by my side. I pledged my service to the Empty Lord and I never wavered, even as I was warned of his downfall. I think perhaps I should have. For those who I once named as allies, have turned against me.

Many of them are alive only because of the actions of me and my steed Hekala.

At the battle of Carrallanger[sic] I rescued Corveth from the flames that threatened to consume her. I dove my dragon deep into the flames, though the heat would mark my flesh forever, and I grasped her hand before the tower collapsed beneath her. If it were not for me she would have perished there and then. Just another statistic in another battle.

Yet now she leads them against me.

Ripper demons. Do I truly deserve such cruelty? They are monstrous creatures. Terrible claws define them, claws sharper and more deadly than any dragons[sic]. They are merciless and alien things. They will tear me apart when they find me. I know this. They will make it a long, agonising end. They feed on that pain.

It flavours the meat'[sic] I remember one of their keepers telling me.

What did I do to deserve such an execution? I did not betray our lord like Apropos did, nor did I cowardly sit on the fence like Hannibus. I know the value of loyalty, even though it seems no one else does. Am I being hunted as punishment for them? What sort of justice is this?

Still, death is preferable to becoming one of those demons. I know how they are made. I know that they are the husks of victims that have become infected by the strange bandage like skin that surrounds them. I refuse to become that. I will take my own life before that happens.

If only Hekala were here. If only I had been able to save her. This conflict would be very different. I would watch as the ripper demons were incinerated beneath dragon fire. I doubt even they could stand up to the raw power of my dragon.

But she is gone.

Murdered by Corveth and her treachery.

So now I am alone. Now I flee into the deep forests of Forinthry. Perhaps I can find shelter in one of the older temples, the forgotten shrines. If I can hide there long enough, perhaps I can be safe.

Empty Lord, I know you were betrayed, but I beg of you now, save one of your true faithful.

Olundai be damned. I want to live.

I deserve to live.

I don't want to die.
Retrieved from ‘https://oldschool.runescape.wiki/w/Ablenkian%27s_escape?oldid=13978971’
Categories: