From Old School RuneScape Wiki
Jump to navigation Jump to search
The RuneScape Wiki also has an article on: rsw:Abyss
This article is about the Abyss location. For other uses, see Abyss (disambiguation).

The Abyss is an area of Abyssal Space that contains rifts created by the Zamorak Magical Institute with which they directly access the runic altars without the need for a talisman, with the exception of the Astral and Wrath Altar. Accessing this area of the Abyss requires completion of the miniquest Enter the Abyss. In appearance, it seems to be oddly organic, with eyes, boils, and strange-looking tendrils.

The location of the Mage of Zamorak

The Abyss consists of two rings: a dangerous outer ring in a multicombat area and a safe inner ring with rifts leading to the runic altars. Aside from the aggressive abyssal creatures inhabiting it, players who enter the Abyss will have their prayer points drained to 0 and be immediately given a skull, although an abyssal bracelet can be worn to prevent the player from getting automatically skulled. 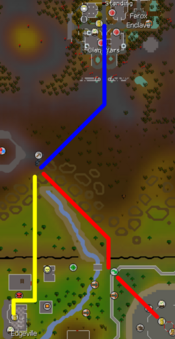 Perhaps the most dangerous aspect of accessing the Abyss is the fact that players have to travel through part of the low-level Wilderness to reach the Mage of Zamorak, who is the only NPC that teleports the player to this part of the Abyss. This causes a risk of being attacked by the occasional player killer, so some degree of caution is required when reaching the mage.

Inside the Abyss[edit | edit source]

The interior of the Abyss is roughly circular, with an 'inner' and 'outer' ring. After the player is teleported into the outer ring, they will have to find a way through to the inner ring where the rifts leading to the runic altars are located.

The outer ring contains a large number of Abyssal monsters:

These monsters can hit over 12 (with the exception of the leeches, which hit a maximum of 2), although they often miss if the player has a decent Defence level (65+) and wears adequate armour such as dragonhide. However, the abyssal monsters should still not be underestimated as, due to their large numbers, a player in the Abyss may take several hits per second. Players take no damage from the monsters while attempting to pass through to the inner ring. Minimising the time between attempts thus increases a player's chances of survival.

A number of skill-based obstacles block access to the inner ring, whose positions are randomly generated each time the player enters the Abyss, and can be in different locations for different players at the same time. Passing an obstacle is more likely with a higher level in the relevant skill.

There are 12 possible configurations of the obstacles, picked randomly upon entering the abyss. The player will always spawn directly in front of the blockage, with the passage on the opposite side of the ring. Moving away from the blockage toward the passage, the order of obstacles in 6 of the configurations is rocks, tendrils, boils, eyes, then gaps, symmetrically in both directions. For the other 6 configurations the order is approximately the reverse (gaps, eyes, boils, tendrils, rocks), but five of the configurations have slight variations on this order when traveling clockwise. Since the closest passable obstacle will always be either rocks or gaps, a high Mining and Agility level are beneficial for efficient navigation. Players will often bring a black pickaxe for passing the rock obstacle since it is lighter than other pickaxes.

At the southern central area of this outer ring lies a small opening, which provides one-way passage to the Abyssal Nexus, a part of the Abyss occupied by Abyssal Sires. 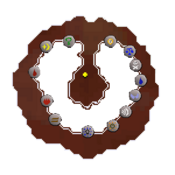 There are no monsters in the inner ring of the Abyss. There are rifts leading to every runic altar (except the Astral and Wrath Altars) there, which makes the Abyss useful for crafting a lot of different types of runes very quickly. Talismans or tiaras are not needed to access the altars via the rifts. The following restrictions still apply:

There is a Z.M.I. initiate standing at the centre of the inner ring (yellow spot on the minimap), maintaining the Abyssal Rift. He will repair player's essence pouches for free.