The Abyss is a location that allows quick access to almost every Runecrafting altar. Before entering the Abyss, players must complete the Enter the Abyss miniquest. Entry to the Abyss is granted by the Mage of Zamorak, who is located in low-level Wilderness north of Edgeville. 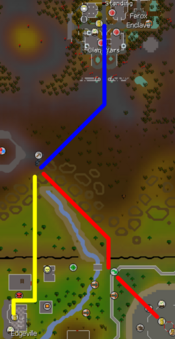 There are two major sources of danger while training Runecraft using the Abyss: player killers while travelling in the low-level Wilderness and Abyssal creatures located in the outer ring of the Abyss. Entering the Abyss immediately drains a player's prayer points to zero and will give the player a skull, affecting which items will be kept upon player death.

You may equip a Falador shield as a means to recharge prayer points in emergency situation when attacked by another player to be able to use Protect Item as well as providing some defensive bonuses.

Abyssal creatures can hit up to 12, and the outer ring of the Abyss is a multicombat area, though they miss often. They attack with both Melee and Magic, so armour like dragonhide is suggested.

It is recommended to set your attack style to defensive and turn off auto retaliate.

The best way to get back to Edgeville is by using an equipped amulet of glory. It is not advised to use an amulet of eternal glory, since it is quite expensive and you will risk getting smited for it if you die to a player killer, because most of the time you are skulled and cannot use Protect Item. It would be wise to obtain extra amulets of glory to make this method as prolonged as possible (20 amulets would cost around 250,660, and you can sell them back at a loss of −6,720 when you need money or take a pause from runecrafting), and buy as many charge dragonstone jewellery scrolls as practical, requiring completion of Heroes' Quest to use.

Ironmen with limited access to amulets of glory may use the mounted amulet of glory in their player-owned house, and bring runes for Teleport to House or teleport tablets. This has the disadvantage of using extra inventory space and a bit more running, but you can also recharge run energy using a revitalisation pool or better, which saves stamina potions. Players with the Edgeville respawn can alternatively use rings of returning instead.

Alternatively players with the Achievement diary cape may teleport to Jarr at the Shanty Pass to bank, then to the Lesser Fanatic who is right next to the ditch. This removes the need to worry about amulet of glory charges and slightly reduces the travel distance. Keep in mind obtaining the cape requires level 91 Runecraft (boostable), along with numerous other difficult and high level requirements.

Players will need a pickaxe of any kind, however cheap and/or light ones are preferred. The infernal pickaxe is untradeable and kept on death, and its special attack can be used to boost your Mining level. Otherwise the type of pickaxe does not affect success rate or speed in the Abyss, so using a light pickaxe, such as a black pickaxe, is preferable, however if your weight is already below 0 kg, it has no benefit over a bronze pickaxe, which is cheaper.

The rest of the equipment should be lightweight and relatively cheap, so players use the least amount of stamina potions and risk as little as possible to player killers. Players with at least level 60 Defence can simply wear the graceful outfit, but players with very low Defence may want to use a more defensive setup.

Regardless of the setup, the Falador shield is the best option for the shield slot, as you can use its special ability to restore your Prayer points. This can be used when you are attacked by a player killer. You can use Protect Item to protect your amulet of glory on death.

An Explorer's Ring, rewarded from completion of the Lumbridge & Draynor Diary, may also prove useful due to the run energy restoring effect, utility of the teleportation from attacking Player killers and its 0kg weight.

Using a more defensive setup is recommended for players with very low Defence. The equipment should be fairly cheap and lightweight, and it is recommended to wear some graceful pieces to reduce the weight. Players with 99 Hitpoints should wear the Hitpoints cape for faster health regeneration, which reduces the need for using food.

The player should bring all essence pouches available and the rest of the inventory should consist of pure essence. Do not take potions or food with you as it will lower your experience and profit per hour. Place the pouches on the top left of your inventory and use shift-click "Empty pouch" when at the altar.

It is best to place the pure essence to the bottom right corner next to the deposit button. Nearby the pure essence there should be spare amulets of glory for teleportation, some cheap food for healing and 1-dose stamina potions for restoring run energy. This makes your banking more efficient, especially if you don't use mousekeys.

You will also need to clear your essence pouch space holders and fill your entire bank with bank fillers, so that you can efficiently deposit all your random runes without depositing what you need in your inventory.

Drink stamina potions and eat food while filling your pouches (whenever needed). If you have completed Alfred Grimhand's Barcrawl, you can take 1 dose stamina potions and break the vial immediately once you take the dose, allowing you to save an inventory spot without dropping or depositing the empty vial.

After banking, click north-east or north of the bank. Clicking west or north-west will result in your character running to the door you entered from which makes you lose 1 or 2 ticks. After you exit the bank, click along the western wall of the men building. Clicking inside if it is closed is fine, if the door is open you will start running inside. After that, click on the ditch and then north 6-8 tiles then northeast until you hit the northern end of River Lum (which then becomes a tunnel to black chinchompas).

When you reach the water you should have already right clicked the teleport option on the Mage of Zamorak. Upon entering the Abyss, click north. 80% of the time you will have to go north first. Spot the closest obstacle (always Mining or Agility); this is where the skills come in. Your success rate for an obstacle is practically your level/99, and at 99 you never fail. After entering, click in the direction of your rift (altar), then right when you enter it make sure you are already clicking on where the altar is. Hold shift, then click pouches to empty them speedily. Make sure when you're crafting the second-third batch of runes you have right-clicked your glory amulet to teleport to Edgeville without wasting ticks, that way you can also see before you're able to teleport if your amulet is charged, or if you need to teleport to Castle Wars with a ring of dueling if it isn't. After teleporting to Edgeville, click right in the bank and then right-click the banker to skip the dialogue and directly access your bank. Clicking this way will save you 1 tick instead of walking the last tile to the bank booth.

With level 77 Runecraft, players can access blood runes with sufficient Arceuus favour, or soul runes at level 90 Runecraft. Using the abyss yields at least 20% more experience per hour, at the cost of slightly more clicks and having to run through the Wilderness. With a sufficiently high agility level and full graceful, players will never run out of energy with this method.

The minimum requirement is having a fast, reliable teleport near the Wilderness ditch. The achievement diary cape is the closest such teleport, followed by the amulet of glory to Edgeville, ring of dueling to Ferox Enclave, or ring of returning to either. The achievement diary cape also has the advantage of being an untradeable item, so it won't be risked should the player be killed while skulled. Players who have completed the elite Desert diary can also wear the desert amulet 4 at lower agility levels to restore run energy. It is not recommended to use an amulet of eternal glory unless the player plans to use an abyssal bracelet to avoid being skulled.

Because you will be taking blood runes through the Wilderness, it is recommended to bank every few trips, either at the Shantay pass (diary cape), the Edgeville bank, or the Ferox Enclave banking options.

As with regular blood rune runs, you can expect 51 dark essence fragments per run: one inventory of 26 fragments followed by an inventory of 25. It is not recommended to drop your chisel in order to fit in an extra essence block unless you plan to craft all the blocks at the dense essence mine anyway.

With the elite Kourend & Kebos diary done, players will receive 10% more blood runes per craft, rounded down. If players have this perk, it is recommended to craft in 26 + 25 (yields 224 runes) as opposed to 27 + 24 (yields 223 runes by chipping one block in the second batch to get 108 shards).