From Old School RuneScape Wiki
(Redirected from Abyss Miniquest)
Jump to: navigation, search
The RuneScape Wiki also has an article on: rsw:Abyss_(miniquest)

{"requirements":"*Completion of [[Rune Mysteries]]","desc":"In the [[Abyss]] miniquest, the player helps the [[Zamorak]]ians access the [[rune essence mine]]s so that they can craft their own runes. Previously, it had been a [[Saradomin]]ist secret, but the [[Mage of Zamorak]] asks for the player's help in learning it.","difficulty":"Novice","kills":"None","name":"Enter the Abyss","start":"The [[Mage of Zamorak]] at the end of the [[River Lum]] in the [[Wilderness]] (Roams levels 4-7).","length":"Short","ironman":"'''<span style=\" color:red;\">Warning:</span>''' [[File:Hardcore_ironman_chat_badge.png]] Hardcore Ironmen should be extremely cautious as the miniquest is started by travelling to level 4-7 [[Wilderness]], with a chance of getting killed by other players.","items":"None\n\n'''Recommended:'''\n*[[Varrock]] and [[Ardougne]] teleport runes and a method of teleportation to [[Edgeville]] (e.g. [[Amulet of glory]]) would be helpful.\n*[[Necklace of passage]] for easy teleport to [[Wizards' Tower]]."} 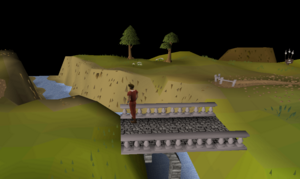 The River Lum, passing through Edgeville into the Wilderness.

Location of the Chaos Temple in Varrock.

Note: If you are wearing any Saradomin or Guthix items, the mage will NOT speak with you. Therefore, it is best to unequip any and all god related items (with the exception of Zamorakian items) before starting a conversation with the mage of Zamorak. Simply putting the items in your inventory is enough, you don't need to bank them.

Getting the readings[edit | edit source]

The Scrying orb after it has all 3 charges.

Completion of the Abyss miniquest is required for the following: