From Old School RuneScape Wiki
Jump to navigation Jump to search
This article is about the Abyssal Area. For other uses, see Abyss (disambiguation).

The Abyssal Nexus is an area connected to the Runecrafting Abyss. It is inhabited by four Abyssal Sires, a higher order of abyssal demons, who were imprisoned within the Nexus during the God Wars along with The Overseer.

The Nexus can be accessed via a one-way entrance in the southern part of the outer ring of the Abyss. Players entering the abyss in this manner will be skulled, unless wearing an abyssal bracelet, and will lose all their prayer points. Alternatively, players who have partially completed Fairytale II - Cure a Queen can safely reach the Nexus using the code DIP in the fairy ring network.

The centre of the Nexus contains the Font of Consumption, behind The Overseer, where players can place the unsired and receive valuable items. Near the entrances to the individual chambers, contains eyes on the floor that can be inspected to check if there are any players fighting the Sire.

In addition, there is an appendage north of the Overseer, marked by an icon

, that teleports players to Lumbridge when pulled. 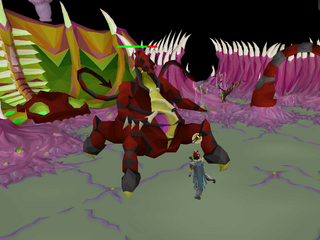 A player takes on the Abyssal Sire in one of its chambers. 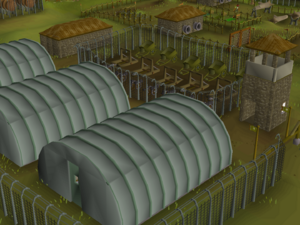 Three barracks, alongside an enclosure with cannons, catapults and carts just north-west of where players participate in the random event.
Retrieved from ‘https://oldschool.runescape.wiki/w/Abyssal_Nexus?oldid=14294255’
Categories: