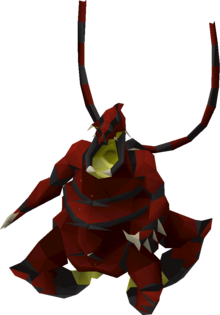 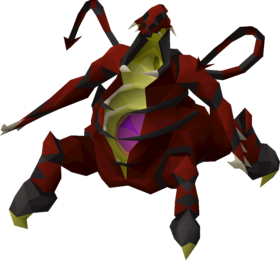 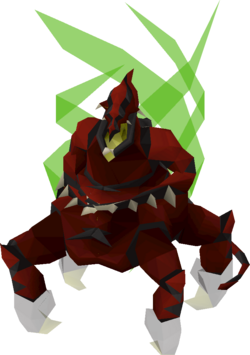 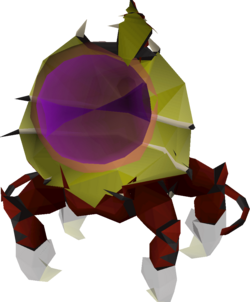 The Abyssal Sire is an abyssal demon slayer boss that requires level 85 Slayer to kill. To access the boss, the player must have visited the Abyss at least once, either through the Mage of Zamorak or the fairy ring network.[1] As with all other slayer bosses, the Sire can only be fought when assigned abyssal demons or itself as an assignment. Although it resides in a multi-combat area, it is a solo-only boss.

According to The Overseer, the Abyssal Sires are the engineers of the Abyss from a time before the God Wars. As their resources began to deplete and they had no means to escape, they constructed the Nexus and remained there in deep stasis.

The Sire is located in the Abyssal Nexus, south of the Abyss used for Runecraft. It can be safely entered via the fairy ring code DIP (if the player has access to them), or it can be accessed via the Abyss although this drains the player's prayer points, and skulls them if not wearing an Abyssal bracelet. There are four chambers in the Nexus where Sire can be found, allowing multiple people to fight the Sire per world, similar to Cerberus.

Random events cannot occur in the Sire's chamber; any random events following the player will be automatically dismissed within appropriate range. Players in invalid tiles when a Sire is dormant will result in teleportation to the centre of the chamber.

It is known for dropping the Unsired, which is then used at the Font of Consumption behind The Overseer to get a chance of obtaining an abyssal whip, dagger, abyssal head, jar of miasma and untradeable parts of the abyssal bludgeon - the bludgeon axon, bludgeon claw, and bludgeon spine, as well as a very small chance at the Abyssal orphan.

As with all demons, the Sire is susceptible to the effects of demonbane weapons.

There is currently a bug causing deaths due to disconnection at Abyssal Sire to not provide a gravestone.[confirmation needed]

The fight consists of three phases:

The Sire respawns near-instantaneously upon death.

Drop rates estimated based on 40,840 kills from the Drop Rate Project, unless otherwise cited.

Excluding unsired drops, the average kill is worth 49,152.00 coins.

There is a 5/139 chance of rolling the tree-herb seed drop table.[2] When the drop table is rolled, double the regular quantity of the item is always dropped.

There is a 3/139 chance of rolling the rare drop table. This monster will always drop double the usual quantity from this table.