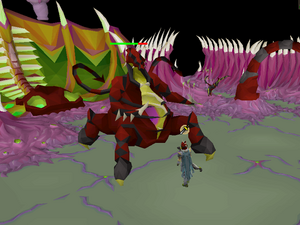 A player takes on the Abyssal Sire.

The Abyssal Sire is a level 85 Slayer boss that can only be killed when assigned Abyssal demons or the Sire itself.

It is mainly killed for its unsired drops, which can be used at the Font of Consumption to obtain valuable rewards such as the abyssal dagger, parts of the abyssal bludgeon, or the abyssal orphan pet.

Unless using a Twisted bow, Ranged is only used to initiate the battle and for taking down the respiratory systems.

Magic is only used to initiate the battle and for taking down the respiratory systems.

Melee is only used for the second and final phase of the fight.

If it is your first time at the Sire, you may want to bring less Stamina, prayer or super restore potions and replace them with food instead (e.g. 1 Stamina potion, 4-5 Prayer potion/Super restores).

Ranged is only recommended when replenishing hitpoints and stats through player-owned house. It is more likely to be quickly killed as the defensive bonuses are much lower, and when not using the ornate rejuvenation pool, healing would take too much of the time to be worth it. A blowpipe can be more effective than the twisted bow when using Dragon darts, but due to the difference being very small and much more expensive, it is not recommended.

The PoH/Nardah method uses the equipment setup as listed above, except very little food and/or prayer potions are taken, resulting in a massive amount of inventory space used to collect drops. Players may teleport to their/another player's PoH, refill at an ornate rejuvenation pool and then use a fairy ring to teleport back to the Abyssal Nexus after two or four respiratory systems are destroyed to refill their stats. This method saves a considerable amount of cost on potions and it is recommended to use this setup once the player has access to an ornate rejuvenation pool.

With the Nardah variant, players use their desert amulet 4 to teleport to Nardah, then use a quest point cape to teleport to the gates of the Legend Guild and return to the Abyssal Nexus with the nearby fairy ring. This variant is less commonly used due to the higher requirements needed.

The far safer way to access is through use of the fairy ring network. You will need to have access to the fairy rings, which is accessed after partial completion of Fairytale II - Cure a Queen. Use the code DIP and you will be sent straight to the Abyssal Nexus without being skulled and losing all of your prayer points.

There are four Sires in each world, in the north-east, north-west, south-east and southwestern areas of the Nexus. There are four eyes near the Font of Consumption; interacting with them will tell you if there is another player in that chamber.

The poisonous fumes that players must avoid.

The Sire is a solo-only boss, despite being in a multi-combat area. This means that other players cannot assist in the fight (although they can drop supplies if desired). The Sire and the spawn/scions will only attack the challenger; however, some of the Sire's attacks can indirectly hit other players if they are within range. Spawn/scions can focus on other players, but will be unable to attack them.

Phase transitions are done automatically when the Sire's health falls under the required threshold.

All of the chambers are identical to each other; the only difference they have is the path to the chambers.

Note: When killing the Sire, make sure that Auto Retaliate is off. 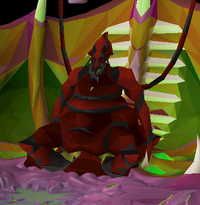 The Abyssal Sire in stasis.

The fight begins when the player attacks the sleeping Sire. The Sire will awaken and control the tentacles in the chamber. The Sire only sends out poison fumes and creates spawns against the player during this phase. In order to progress to the next phase, the four respiratory systems in the room must be destroyed. The tentacles are much of a hindrance during this phase, as they greatly reduce the max hit of your attacks to 3, and even then an experience drop does not guarantee that any damage is dealt to the respiratory system.

This can be bypassed by disorienting the Sire:

When disoriented, the Sire and the tentacles will be stunned for 30 seconds. When the tentacles start to wake, run back to the Sire and cast a shadow spell until it is disoriented. If you are casting anything below Shadow Barrage, you may need to use multiple shadow spells to disorient it. The respiratory systems can only be attacked with either Magic or Ranged; a Toxic blowpipe on rapid is recommended to destroy them quickly, though a crystal bow is even better due to not having to run as much. The Sire may be disoriented while stunned to reset the timer should the player destroy the respiratory systems quickly.

Note that as of the 24 August 2017 update, the slayer helmet's effects will now work on the respiratory systems, so they should fall quickly to your weapon of choice against them. If the systems are killed at a reasonable rate, only two spells will be needed at most (more if using shadow spells other than barrage). 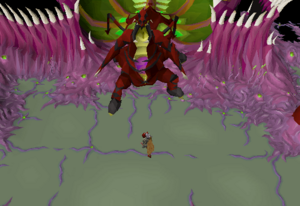 Stand on any spot along this vein as you await the Sire to start Phase 2.

The optimal procedure for this stage is as follows:

Note: At this point, the player must kill the Sire or the whole fight will be reset. The Sire will return into the chamber if it is not in combat for one minute. If the first attacker dies/leaves, another player can attack after 10–20 seconds have passed.

The Sire will leave its resting place and will attack the player with Melee. Use Protect from Melee to greatly reduce the accuracy and damage of its attacks, as the double tendril attack can deal up to 60 damage if not protected against. Like in phase 1, the Sire can create spawns and launch poisonous fumes, though they're rather uncommon.

During this phase, all six tentacles in the chamber will be disabled, so they will be unable to damage the player during this part of the fight. However, safespotting the Sire will result in it forcibly teleporting the player next to it, then discharging a blast from the portal in its stomach for over 60 damage if players do not run away in time. It's generally better to tank the attacks normally rather than trying to safespot it.

If you are using the POH method, use both of your Bandos godsword or Dragon warhammer specials at the start of phase two after returning from the fairy ring. Otherwise try to conserve your special attacks to consistently extend your trips.

Once the Sire is damaged to below half Hitpoints, Phase 3 will begin. Switch to Protect from Missiles during the phase transition animation.

Stay within the middle area to avoid damage from tentacles.

The Sire walks to the middle of the area, and will stop attacking with Melee. As soon as it finishes attaching itself to the ground, four spawns will appear. It will only throw out poisonous fumes as its only attack at this stage. In addition, the Sire gets increased Hitpoint regeneration; it seems to be random, as there are cases where it slowly regenerates health (less than 1%), while in other cases it can rapidly regenerate health (1-2% every 2.4 ticks). The tentacles will also awake again, though they can still be easily avoided if standing in the middle.

The poisonous fumes can be easily avoided by moving back and forth. Select two tiles that are within melee range (make sure they're out of the reach of the tentacles), attacking the Sire in a 1-2 attack format. If health falls low, run south of the Sire and cast blood spells on the scions or let them die off before running back to attack it again.

Once the Sire reaches 139 Hitpoints or lower, stage two of this phase begins.

The Sire opens a large portal within its body, causing spawns to emerge until it dies.

As soon as the Sire reaches 139 Hitpoints or lower, the Sire will teleport the player south of it. The Sire will then explode two ticks after teleporting the player, dealing massive damage if you don't move away in time. It can be simply avoided by running at least two tiles away from it. A large group of spawns will appear under the Sire, who serves as their spawn point. Some spawns may also drop down from above around the player's position.

Be aware that the Sire will follow up the explosion with three more poisonous fume attacks. Keep attacking the Sire while running to and from tiles like in the previous stage to avoid the poisonous fumes. Players with a dragon or crystal halberd can use the special to quickly kill the Sire before the summoned spawns turn into scions.

The chances of dying increase dramatically in this phase as the fight drags on, as the scions can deal considerable damage and roughly half of them use melee, while the other half use ranged. You should keep your health around 50 or higher, since the scions can easily stack you out if you are at or below 30 health. Though it may seem feasible to use Protect from Melee as melee armor is more resistant to ranged, the Scions' ranged attacks have an additional 30 ranged accuracy which make them more accurate than their melee attacks, despite possessing an Attack level of 120 compared to 100 Ranged.

The southeastern safe spot to heal off the minions.

If you need to heal yourself, lure the spawns/scions while casting Blood Burst/Blood Barrage; their negative Magic Defence should ensure that your spells will hit and heal a large portion of your health, even if you have a negative magic bonus. This should be done when the player is near the southern area of the chamber, as there are two spots where players can safely cast blood spells on the minions (one is shown to the right).

If using the twisted bow, it may be useful to trap the minions behind one of the middle tentacles, as they will not actively move around it to reach the player. However, this is rather unfeasible since there are still several spawns yet to appear and the unnecessary running needed for it.