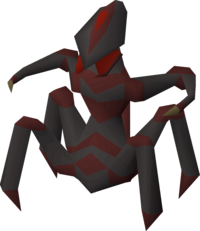 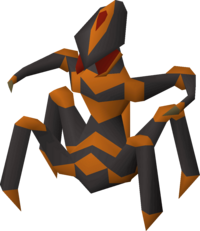 Abyssal demons are one of the strongest types of demons, requiring level 85 Slayer to be damaged. Alongside their boss variant, they are the only creatures in the game to drop the abyssal whip and abyssal dagger.

In combat, abyssal demons are capable of teleporting either themselves or the player around, meaning that safespotting is not possible. When teleported, you will stop attacking the demon. Having Auto Retaliate turned on can help make sure you fight back. They have relatively high accuracy but their max hit of 8 is low for their combat level.

Being a demon, this creature is affected by demonbane weapons.

Drop rates estimated based on 1,142,066 kills from the Drop Rate Project, unless otherwise cited.

The average Abyssal demon kill while on a Konar task is worth 9,159.29.

There is approximately a 80/100 chance of rolling the Wilderness Slayer Cave drop table, which includes various items available from Justine's stuff for the Last Shopper Standing.