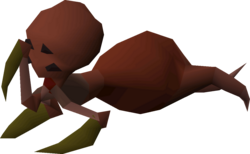 An abyssal leech is a monster that dwells in the Abyss, and also in the Abyssal Area. They are the easiest abyssal monsters to kill because they have low defence, low strength, and low hitpoints. However, they have a very high attack level and attack speed, attacking every second tick, making them more dangerous than their combat level may suggest.

Drop rates estimated based on 56,826 kills from the Drop Rate Project, unless otherwise cited.