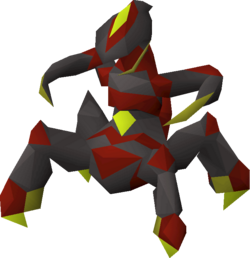 The Abyssal orphan is a boss pet that resembles the scions that are encountered during the Abyssal Sire boss fight.

Players have a 5/128 (1/25.6) chance of obtaining the abyssal orphan when they place an unsired on the Font of Consumption behind The Overseer. As an unsired is a 1/100 drop, this effectively makes the chance of an abyssal orphan 1/2,560. When the unsired is placed into the font, if the pet chance is rolled, a message will appear in the chatbox stating The Font appears to have revitalised the Unsired!.

This dialogue is only triggered when the abyssal orphan is battling another pet in the arena in the Menagerie.