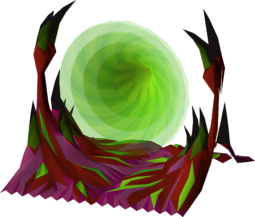 The abyssal portal is a portal that leads deep into the Abyss, and was created by Xeric. While admiring the other world, Vespula flew through the portal and attacked Xeric's crew, who fled the scene. Vespula now controls the area and tends to her offspring while protecting the portal.

The portal must be destroyed in order to dispel Vespula and her offspring to proceed further into the caves. However, attacking the portal when Vespula is flying will cause her to enrage, attacking nearby players; she will stop flying once she reaches 23% of her Hitpoints, making it safer to attack the portal. If any of her lux grubs grow into vespine soldiers, Vespula and the abyssal portal will both regain hitpoints while they are alive. If under attack the abyssal portal will drain the prayer points of players standing in range by three points every two ticks; if prayer points are already depleted, then three damage will applied instead.

The portal is at least eight tiles away from the accessible area, therefore some weapons require long-range attack options. Armadyl crossbow and twisted bow may be used on rapid attack style due to their longer range. While the portal does not attack the players itself, it has a high Magic level, making twisted bow perform exceptionally well, although the portal does have a fairly high Ranged defence bonus and thus it is recommended to attack with accurate options whenever possible.