From Old School RuneScape Wiki
Jump to: navigation, search
For a list of all items and upgrades within the Construction skill, see Construction/Level up table.
Achievement gallery 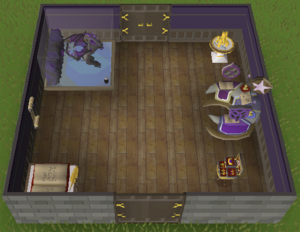 If the player uses an orange spicy stew to boost their Construction by 5 levels, it is possible to build an achievement gallery at level 75 Construction.

The adventure log allows players to show off to other players the following:

The boss lair allows a player to build a fancy display showing off various bosses. In order to display a boss lair, players must have killed the boss once, and using a certain jar dropped by that boss.

The mounted display displays certain items to show off the player's items or wealth.

The jewellery box can store various teleportation jewellery. Each box will provide unlimited teleports to locations provided by the enchanted jewellery.

Jewellery boxes are constructed in upgrades: before a higher level box can be built, the player must first build the one before it. Bank notes are NOT accepted, each item must be brought.

The quest list displays the player's progress through every quest and miniquest. It will show which quests the player has completed, started and not started.