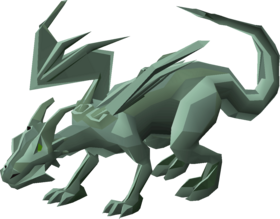 Adamant dragons are metal dragons first encountered during Dragon Slayer II, in which the player must fight against one during Zorgoth's assault. After completion of the quest, they can be found in the western chamber of the Lithkren Vault.

To get back to the laboratory underneath Lithkren, players can travel using the rowboat from the quest or, after completion, taking a digsite pendant and using it on the strange machine north of the rune dragon room, adding a teleport straight to Lithkren on it.

Adamant dragons are the result of a side project of Zorgoth's after being inspired by another dragonkin, Forcae, which involves infusing dragon eggs with various metals. While Forcae's metal dragons were created to find a solution to the dragonkin's infertility, Zorgoth had bred his metal dragons for his war against humanity.

Adamant dragons have multiple attacks, similar to mithril and rune dragons. Along with standard dragonfire attacks, they have a standard melee, ranged and magic attack (which resembles Earth Wave), as well as two unique attacks.

The first attack is a poison projectile, which lands on the player's position and splits into two more projectiles around the original projectile in a 5x5 area. These projectiles can hit from 14-25, but can be reduced to 4-8 by being under the effect of any poison protection. Players can avoid the attack entirely by moving three squares away from their original position when the attack was launched.

The second attack is a Ranged attack that hits through Protect from Missiles, and uses the Blood Forfeit effect from enchanted ruby bolts, where the dragon sacrifices 10% of its current hitpoints to deal damage equal to 20% of the player's current hitpoints. Because of this effect, it is recommended to keep the player's hitpoints around 40-50 to minimise the damage dealt from this attack.

The average Adamant dragon kill while on a Konar task is worth 28,347.1.

There is a 8/110 chance of rolling the useful herb drop table.

There is a 1/110 chance of rolling the rare drop table.