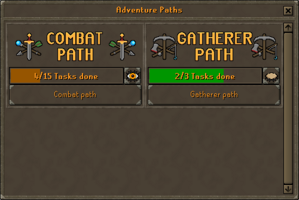 The Adventure Paths overview, showing the different available paths and the player's progress.

Adventure Paths are a task system intended to help new players get on their feet by completing tasks for various low level rewards. Players will only be eligible for Adventure Paths if they've told the Gielinor Guide at the very beginning of Tutorial Island that they are either a new player or are a player that has played in the past, but not recently. In addition, players who choose to play Ironman Mode are not eligible.

The task system currently has two path available at the same time: the Combat Path, with a total of 15 tasks, and the Gatherer Path, with three tasks (one per skill). 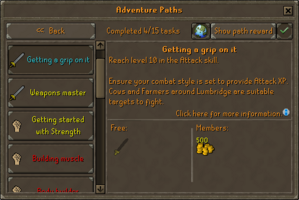 Viewing a task in the Combat Path.

The Combat Path involves levelling up the player's combat skills to a certain level. Beginning the Combat Path rewards players with a combat path starter kit.

Players who complete the Combat Path can receive a combat path voucher from Adventurer Jon, which can be used to claim various rewards from NPCs in Varrock; members receive both the Free to play reward and the Members reward. 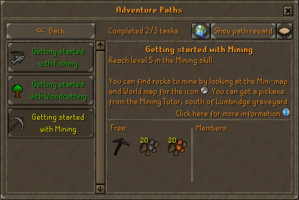 Viewing a task in the Gatherer Path.

The Gatherer Path involves levelling up the player's gathering skills to a certain level.

Players who complete the Gatherer Path can receive a lamp of the gatherer from Adventurer Jon which when rubbed grants 150 experience in either Woodcutting, Fishing or Mining.