From Old School RuneScape Wiki
Jump to: navigation, search
The RuneScape Wiki also has an article on: rsw:Adventurer
This article is about the Adventurer killed and eaten by Burntmeat. For the Temple Trekking individual, see Adventurer (easy).
For the player in general, see Player character.
Adventurer 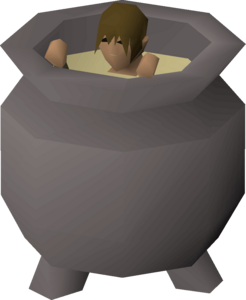 The adventurer is a young man who is interrogated and later boiled alive in a cauldron within the Troll Stronghold's kitchen by Burntmeat during the first cutscene in My Arm's Big Adventure.

Burntmeat then realises from the Adventurer that Goutweed can be grown again and informs the player that his assistant, My Arm, will need help growing it.

The Adventurer was formerly carrying a Abyssal Whip, Dragon Chainbody, Dragon Platelegs, a Dragon Med Helm, a unknown amount of Coins and a Cooked Shark. These items are seen on the floor of the kitchen during the cutscene.