A player with a cormorant's glove equipped

Hunters can get a cormorant's glove and a cormorant, free of charge, from the fishing expert Alry the Angler at Lake Molch. Both hands must be free for aerial fishing, which means no items may be carried in the weapon, shield and gloves slot. It is possible to use skill boosts to receive a cormorant's glove, which will allow players to catch Bluegill even if their level(s) drain back to normal.

With a cormorant's glove equipped, as long as the player has suitable bait (such as a King worm) in their inventory, they can click on a fishing spot that will send the cormorant out to catch a fish. The cormorant will always return to the player with a fish.

King worms are used as bait, which can be gathered on the island. When the player starts to catch fish, a knife can be used to obtain stackable fish chunks, granting Cooking experience; fish chunks can be used in place of king worms, where the cormorant will take 1 fish chunk every 3 or 4 catches as their reward for gathering the fish.

Unlike Falconry, a catch is guaranteed each time the bird is sent. Multiple players can catch from the same pool and will see people fishing from all sides of the circular island. If the bird is sent while the pool is moving to a new location, it will still count as successful.

The time between catches varies with the distance between the player and the fishing spot. The shortest wait occurs after targeting a fishing spot within the player's 3x3 reach (i.e. directly adjacent to the player) whereby the Cormorant will be available again on the next tick. It is therefore possible to catch one fish per tick while there are fishing spots close enough to the player.

The following Hunter creatures may be caught using the aerial fishing technique.

The type of fish caught depends on the player's visible Fishing and Hunter levels. Boosts above 99 are not capped to 99 during the calculations.[1]

The formula for what type of fish is caught is as follows. 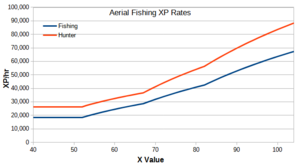 Aerial Fishing XP rates as a function of roll variable X. Assumes 1600 fish/hr and assumes at each X the requirements for the applicable fish are met, meaning Fishing levels and Hunter levels are close together. Useful to see relative XP rates by approximate levels.

Pick a random number 0 to (X-1) inclusive, where

The following items may also be rarely obtained:

When fishing within Lake Molch, each catch has a 1/100 to 1/75 chance of giving Molch pearls in addition to the player's catch, which scales based on the player's Fishing and Hunter levels. These can be used to purchase various rewards in Alry the Angler's Angling Accessories including the Angler outfit.

The chance of receiving a pearl is

. [3] Visible Fishing and Hunter boosts are taken into account and are not capped to 99. [1] Rada's Blessing does not affect the chances of receiving a Molch pearl. [4]

With an efficient strategy, a player can reach upwards of 1600-1800 fish per hour, and an average pearl yield of 16-24 per hour. It is expected to take 16 to 25 hours to collect enough pearls for the angler's outfit, which is considerably slower and remarkably more attentive than obtaining them through the Fishing Trawler minigame.

Below is a list of experience gained per hour, based on levels (provided 1600 fish are caught per hour).